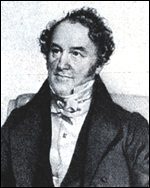 Conradin Kreutzer or Kreuzer (Messkirch in Baden, 22 November 1780 – Riga, 14 December 1849) was a German composer and conductor. His works include the opera Das Nachtlager in Granada, and Der Verschwender (Incidental music), both produced in 1834 in Vienna.

Kreutzer abandoned his studies in the law (University of Freiburg) and went to Vienna about 1804, where he met Joseph Haydn and may have studied with Johann Georg Albrechtsberger, while he tried his hand unsuccessfully at singspielen. He spent 1811–12 in Stuttgart, where at least three of his operas were staged and he was awarded the post of Hofkapellmeister. He was from 1812 to 1816 Kapellmeister to the king of Württemberg. Once he was successful, he became a prolific composer, and wrote a number of operas for the Theater am Kärntnertor, Theater in der Josefstadt and Theater an der Wien Vienna, which have disappeared from the stage.

In 1840 he became conductor of the opera at Cologne. His daughters, Cecilia and Marie Kreutzer, were sopranos of some renown.

Kreutzer owes his fame almost exclusively to Das Nachtlager in Granada (1834), which kept the stage for half a century in spite of changes in musical taste. It was written in the style of Carl Maria von Weber. The same qualities are found in Kreutzer's part-songs for men's voices, which at one time were extremely popular in Germany. Among these "Das ist der Tag des Herrn" ("The Lord's Day") may be named as the most excellent. His Septet for winds and strings, Op. 62, remains in the chamber music repertory. He was one of the 50 composers who wrote a Variation on a waltz of Anton Diabelli for Part II of the "Vaterländischer Künstlerverein" (published 1824).

This article uses material from the article Conradin Kreutzer from the free encyclopedia Wikipedia and it is licensed under the GNU Free Documentation License.