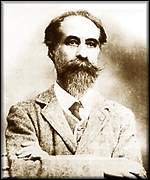 Charles Louis Eugène Koechlin (French pronunciation: [al lwi øn kekl]; 27 November 186731 December 1950) was a French composer, teacher and writer on music. He was a political radical all his life and a passionate enthusiast for such diverse things as medieval music, The Jungle Book of Rudyard Kipling, Johann Sebastian Bach, film stars (especially Lilian Harvey and Ginger Rogers), traveling, stereoscopic photography and socialism. He once said: "The artist needs an ivory tower, not as an escape from the world, but as a place where he can view the world and be himself. This tower is for the artist like a lighthouse shining out across the world."[1]

Koechlin was born in Paris, and was the youngest child of a large family. His mother's family came from Alsace and he identified with that region; his maternal grandfather had been the noted philanthropist and textile manufacturer Jean Dollfus, and Koechlin inherited his strongly developed social conscience. His father died when he was 14. Though he was early interested in music his family wanted him to become an engineer. He entered the École Polytechnique in 1887 but the following year was diagnosed with tuberculosis and had to spend six months recuperating in Algeria. He had to repeat his first year at the École and graduated with only mediocre grades. After a struggle with his family and private lessons with Charles Lefebvre he entered the Paris Conservatoire in 1890 studying first with Antoine Taudou for harmony. In 1892 he started studying with Massenet for composition, André Gedalge for fugue and counterpoint, and Louis Bourgault-Ducoudray for musical history. His fellow-pupils included George Enescu, Ernest Le Grand, Reynaldo Hahn, Max d'Ollone, Henri Rabaud, and Florent Schmitt. From 1896 he was a pupil of Gabriel Fauré, where his fellow-pupils now included Ravel and Jean Roger-Ducasse. Fauré had a major influence on Koechlin; in fact Koechlin wrote the first Fauré biography (1927), a work which is still of value. In 1898 a grateful Koechlin orchestrated the popular suite from Fauré's Pelléas et Mélisande and in 1900 assisted Fauré in the production of the huge open-air drama Promethée.

After his graduation Koechlin became a freelance composer and teacher. He married Suzanne Pierrard in 1903, but after 1921 regularly corresponded with his former student, composer Catherine Murphy Urner in California. In 1909 he began regular work as a critic for the Chronique des Arts and in 1910 was one of the founders, with Ravel, of the Société musicale indépendante, with whose activities he was intensely associated. From its inception in the early 1930s to his death he was a passionate supporter of the International Society for Contemporary Music, eventually becoming President of its French section. From 1937 he was elected President of the Fédération Musicale Populaire. At first comfortably off, he divided his time between Paris and country homes in Villers-sur-Mer and the Côte d'Azur, but after the onset of World War I his circumstances were progressively reduced, he was forced to sell one of his houses and, from 1915, took work lecturing and teaching. Partly due to his vigorous championing of younger composers and new styles, he was never successful in his attempts to gain a permanent teaching position for himself, though he was an examiner for many institutions (e.g. the Conservatoires of Brussels, Rheims and Marseilles). He was rejected for the post of Professor of counterpoint and fugue at the Paris Conservatoire in 1926 by 20 votes to two (the two being Albert Roussel and Maurice Emmanuel), but from 1935 to 1939 he was allowed to teach fugue and modal polyphony at the Schola Cantorum.

He visited the USA four times to lecture and teach in 1918-19, 1928, 1929 and 1937. On the second and third visits he taught at the University of California, Berkeley, through arrangements made by Catherine Urmer, who afterward lived with him until 1933.[2] On the 1929 visit his symphonic poem La Joie païenne won the Hollywood Bowl Prize for Composition and was performed there under the baton of Eugene Goossens. Even so, Koechlin had to pay for the preparation of orchestral parts, and in the 1930s he sank most of his savings into organizing performances of some of his orchestral works. In the 1940s, however, the music department of Belgian Radio took up his cause and broadcast several premieres of important scores including the first complete performance of the Jungle Book cycle. He died, and his body is buried, at his country home at Le Canadel, Var, aged 83. Some of his papers are housed at the University of California at Berkeley Library, donated by Catherine Urmer's husband Charles Rollins Shatto.[3]

Koechlin was enormously prolific, as the worklist below (by no means exhaustive) suggests. He was highly eclectic in inspiration (nature, the mysterious orient, French folksong, Bachian chorale, Hellenistic culture, astronomy, Hollywood movies, etc.) and musical technique, but the expressive core of his language remained distinct from his contemporaries. At the start of his career he concentrated on songs with orchestral accompaniment, few of which were performed as intended during his lifetime. A recent (2006) recording of a selection (Hänssler Classic CD93.159) shows he was already master of an individual impressionism deriving less from Debussy than from Berlioz and Fauré. Thereafter he concentrated on symphonic poems, chamber and instrumental works.

After World War I his continuing devotion to the symphonic poem and the large orchestra at a period when neoclassicism and small ensembles were more fashionable may have discouraged performance and acceptance of his works. His compositions include the four symphonic poems and three orchestral songs making up Livre de la jungle after Rudyard Kipling; many other symphonic poems including Le Buisson Ardent after Romain Rolland (this is a diptych of two orchestral poems, performable separately) and Le Docteur Fabricius after a novel by his uncle Charles Dollfus; three string quartets; five symphonies including a Seven Stars Symphony inspired by Hollywood; sonatas for flute, oboe, clarinet, bassoon, horn, violin, viola and cello, and much other chamber music; many songs, over two hundred opus numbers in all; and a vast number of monodies, fugal studies, chorale harmonizations and other educational pieces. Many works remain unpublished, however.

He wrote in several styles, sometimes severe Baroque counterpoint, as in the fugue that opens his Second Symphony (unrecorded as of 2005), sometimes "impressionistically" as in the tone poem Au Loin, or, as in the Symphony No. 2's scherzo, yet more astringently. He could go from extreme simplicity to extreme complexity of texture and harmony from work to work, or within the same work. Some of his most characteristic effects come from a very static treatment of harmony, savouring the effect of, for instance, a stacked-up series of fifths through the whole gamut of the instruments. His melodies are often long, asymmetrical and wide-ranging in tessitura. He was closely interested in the works of Schoenberg, some of which he quoted from memory in his treatise on Orchestration. The twelve tone technique is one of the several modern music styles parodied in the 'Jungle Book' symphonic poem Les Bandar-Log, but Koechlin also wrote a few pieces in what he described as the 'style atonal-sériel'. He was fascinated by the movies and wrote many 'imaginary' film scores and works dedicated to the Hollywood actress Lilian Harvey, on whom he had a crush. His Seven Stars Symphony features movements inspired by Douglas Fairbanks, Lilian Harvey, Greta Garbo, Clara Bow, Marlene Dietrich, Emil Jannings and Charlie Chaplin in some of their most famous film roles. He also composed an Epitaph for Jean Harlow and a suite of dances for Ginger Rogers. He was interested in using unusual instruments, notably the saxophone and the early electronic instrument the Ondes Martenot. One movement of the Second Symphony requires four of them (and has not usually been included in the few performances of the work, for that reason). He also wrote several pieces for the hunting-horn, an instrument he himself played. Koechlin orchestrated several pieces by other composers. In addition to the Fauré Pelléas et Mélisande suite mentioned above he orchestrated the bulk of Claude Debussy's 'legende dansée' Khamma under the composer's direction, from the piano score [1], and orchestrated Cole Porter's ballet Within the Quota; other works he transcribed include Schubert's Wanderer Fantasy and Chabrier's Bourrée fantasque.

As educator and author

Koechlin began assisting Fauré in teaching fugue and counterpoint while he was still a student in the 1890s, but though he taught privately and was an external examiner for the Paris Conservatoire throughout his career, he never occupied a permanent salaried teaching position. Composers who studied with him included Germaine Tailleferre, Roger Désormière, Francis Poulenc and Henri Sauguet. Cole Porter studied orchestration with him in 1923-24. Darius Milhaud, though never a pupil, became a close friend and considered he learned more from Koechlin than any other pedagogue. Koechlin wrote three compendious textbooks: one on Harmony (3 vols, 1923-6), one on Music Theory (1932-4) and a huge treatise on the subject of orchestration (4 vols, 193543) which is a classic treatment of the subject. He also wrote a number of smaller didactic works, as well as the life of Fauré mentioned above.

Despite his lack of worldly success Koechlin was apparently a loved and venerated figure in French music, his long flowing beard contributing to his patriarchal image. Following his 1888 illness the need to build up his strength led him to become an enthusiastic mountaineer, swimmer and tennis player. He was also an amateur astronomer and an accomplished photographer. He was one of the great nature-mystics among French composers, whose personal creed was pantheistic rather than Christian. Though never a member of the Communist Party he subscribed to its ideals, and in the later 1930s especially was much concerned with the idea of 'Music for the People'.

This article uses material from the article Charles Koechlin from the free encyclopedia Wikipedia and it is licensed under the GNU Free Documentation License.