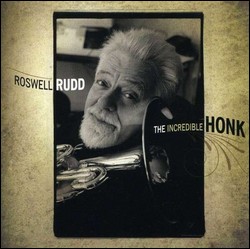 Although skilled in a variety of genres of jazz (including Dixieland, which he performed while in college) and other genres of music, he is known primarily for his work in free and avant-garde jazz. Since 1962 Rudd has worked extensively with saxophonist Archie Shepp.[2]

Rudd was born in Sharon, Connecticut. He attended the Hotchkiss School and graduated from Yale University, where he played with Eli's Chosen Six, a dixieland band of students that Rudd joined in the mid-'50s. The sextet played the boisterous trad jazz style of the day and recorded two albums, including one for Columbia Records. His collaborations with Cecil Taylor, Archie Shepp, John Tchicai, and Steve Lacy grew out of the lessons learned while playing rags and stomps for drunken college kids in Connecticut.[3]

Rudd later taught ethnomusicology at Bard College and the University of Maine.[4] On and off for a period of three decades, he assisted Alan Lomax with his world music song style (Cantometrics)[5] and Global Jukebox projects.[6]

In the 1960s, Rudd participated in free jazz recordings such as the New York Art Quartet; the soundtrack for the 1964 movie New York Eye and Ear Control; the album Communications by the Jazz Composer's Orchestra; and in collaborations with Don Cherry, Larry Coryell, Pharoah Sanders, and Gato Barbieri. Rudd has had lifelong friendships with saxophonists Archie Shepp and Steve Lacy and has performed and recorded the music of Thelonious Monk with Lacy.[7]

Rudd and his producer and partner Verna Gillis went to Mali in 2000 and 2001. His album MALIcool (2001), a cross-cultural collaboration with kora player Toumani Diabaté[8] and other Malian musicians, represented the first time the trombone had been featured in a recording of Malian traditional music.[9]

In 2004, he brought his Trombone Shout Band to perform at the 4th Festival au Désert in Essakane, Tombouctou Region, Mali. In 2005, he extended his reach further, recording an album with the Mongolian Buryat Band, a traditional music group of musicians from Mongolia and Buryatia, entitled Blue Mongol.[10]

Rudd conducts master classes and workshops both in the United States and around the world.[11]

This article uses material from the article Roswell Rudd from the free encyclopedia Wikipedia and it is licensed under the GNU Free Documentation License.