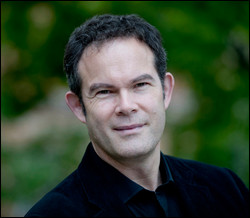 He was born in Montreal and received his musical education in St. Matthew's Anglican Church, Ottawa, the University of Ottawa, King's College, Cambridge and the Royal College of Music in London, England. The sometime organist of Westminster Abbey, Sir William Mckie, who lived during his last years in Ottawa and who was Finley's great-uncle, encouraged him in his early musical activities.[1]

He is particularly renowned for his interpretations of Mozart roles such as Guglielmo, Papageno, Figaro, the Count and Don Giovanni. He made his New York debut at the Metropolitan Opera on January 24, 1998 in the role of Papageno in Die Zauberflöte. He has subsequently performed the title role of Don Giovanni and Marcello in Puccini's La bohème at the Metropolitan.[2]

In addition to his success with Mozart, Finley has been active in contemporary opera. He has created a number of roles including Doctor Oppenheimer in the world premiere of John Adams' opera Doctor Atomic at the San Francisco Opera on October 1, 2005. This opera had its Metropolitan Opera premiere with Finley in the Oppenheimer role on October 13, 2008 and was broadcast as part of the Met's Live in HD broadcast series on November 8, 2008. Other roles he has originated include Harry Heegan in The Silver Tassie by Mark-Anthony Turnage at the English National Opera and the title role in Fantastic Mr. Fox by Tobias Picker at the Los Angeles Opera.[3]

Finley has been critically praised in both opera and concert. After a recital at Carnegie Hall in March, 2007, he was praised by New York Times critic Bernard Holland as having a "bass-baritone of easy luxury" and that his "sensibilities begin with the pre-eminence of words." [4] His portrayal of Schumann's Dichterliebe at the Wigmore Hall in 2006 was also highly praised.

Expanding his repertoire, Finley sang the title role of Eugene Onegin at the Royal Opera House, Covent Garden, this March. This is the second time he has sung a Tchaikovsky role for the Royal Opera; the first being Prince Yeletsky, from Pique Dame. In 2011 he sang Hans Sachs in the Glyndebourne Opera production of Die Meistersinger von Nürnberg.[5]

Finley appears on a number of recordings, including several solo albums on the Hyperion label.[3]

This article uses material from the article Gerald Finley from the free encyclopedia Wikipedia and it is licensed under the GNU Free Documentation License.