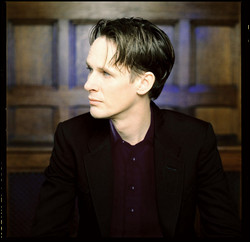 Ian Charles Bostridge CBE (born 25 December 1964) is an English tenor, well known for his performances as an opera and lieder singer.

Bostridge was born in London, the son of Leslie Bostridge and Lillian (née Clark).[1] His father was a chartered surveyor.[2] Bostridge is the great-grandson of the Tottenham Hotspur goalkeeper from the early twentieth century, John "Tiny" Joyce.[3]

He was a Queen's scholar at Westminster School. He attended St John's College, Oxford, where he secured a First in modern history and St John's College, Cambridge, where he received an M.Phil in the history and philosophy of science. He was awarded his D.Phil from Oxford[2] in 1990, on the significance of witchcraft in English public life from 1650 to 1750, supervised by Keith Thomas. He worked in television current affairs and documentaries for two years in London before becoming a British Academy post-doctoral fellow at Corpus Christi College, Oxford, teaching political theory and eighteenth-century British history. He became a full-time singer in 1995, aged 30. His book Witchcraft and Its Transformations, c. 1650–1750 was published as an Oxford Historical Monograph in 1997. This – "the most sophisticated and original of all recent histories of early modern demonology" according to Professor Stuart Clark ("Witchcraft and Magic in Europe" volume 4, p139, 2002,[4] – has been an influential work in the study of the pre-Enlightenment. It "achiev[es] that rarest of feats in the scholarly world: taking a well-worn subject and ensuring that it will never be looked at in quite the same way again" (Noel Malcolm, TLS).[5] In 1991 he won the National Federation of Music Societies Award and from 1992 received support from the Young Concert Artists Trust.

Bostridge began singing professionally only at age 27.[2] He made his Wigmore Hall debut in 1993, his Purcell Room debut (an acclaimed Winterreise) and his Aldeburgh Festival debut in 1994. In 1995, he gave his first solo recital in the Wigmore Hall (winning the Royal Philharmonic Society's Debut Award). He gave recitals in Lyon, Cologne, London and at the Aldeburgh, Cheltenham and Edinburgh Festivals in 1996 and at the Alte Oper, Frankfurt in 1997.

His first solo-featured recording was for Hyperion Records, a Britten song recital, The Red Cockatoo with Graham Johnson. His subsequent recording of Die schöne Müllerin in Hyperion's Franz Schubert Edition won the Gramophone's Solo Vocal Award for 1996. He won the prize again in 1998 for a recording of Robert Schumann Lieder with his regular collaborator, the pianist Julius Drake and again in 2003 for Schumann's Myrthen and duets with Dorothea Röschmann and Graham Johnson, as part of the Hyperion Schumann edition.

An EMI Classics exclusive artist since 1996, he is a 15-time Grammy Award nominee. His CDs have won all of the major record prizes including Grammy, Edison, Japanese Recording Academy, Brit, South Bank Show Award, Diapason d'Or de l'Année, Choc de l'Année, Echo Klassik and Deutsche Schallplattenpreis. His recording of Schubert's "Die Forelle" with Julius Drake forms part of the soundtrack of the 2011 film Sherlock Holmes: A Game of Shadows. His album of Shakespeare Song for Warner Classics won the 2017 Grammy award and the Echo Klassik award for solo vocal.

Bostridge made his operatic debut in 1994, aged 29, as Lysander in A Midsummer Night's Dream with Opera Australia at the Edinburgh Festival, directed by Baz Luhrmann. In 1996, he made his debut with the English National Opera, singing his first Tamino (The Magic Flute). In 1997, he sang Quint in Deborah Warner's new production of The Turn of the Screw under Sir Colin Davis for the Royal Opera. He has recorded Flute (Britten's A Midsummer Night's Dream) with Sir Colin Davis for Philips Classics; Belmonte (Die Entführung aus dem Serail) with William Christie for Erato; Tom Rakewell (The Rake's Progress) under John Eliot Gardiner for Deutsche Grammophon (Grammy Award); and Captain Vere (Billy Budd) (Grammy Award) with Daniel Harding. In 2007 he appeared at the ENO in the role of Aschenbach in Britten's Death in Venice, in a production by Deborah Warner.

In 1997 he made a film of Schubert's Winterreise for Channel 4 directed by David Alden;[6] he has been the subject of a South Bank Show profile documentary on ITV[7] and presented the BBC 4 film The Diary of One Who Disappeared about Czech composer Leoš Janáček.[8] He has written on music for The New York Review of Books, The Guardian, The Times Literary Supplement, Opernwelt, BBC Music Magazine, Opera Now and The Independent.

Later engagements included recitals in Paris, Stockholm, Lisbon, Brussels, Amsterdam and the Vienna Konzerthaus. In North America he appeared in recitals in New York City at the Frick Collection in 1998 and Alice Tully Hall in 1999 and made his Carnegie Hall debut under Sir Neville Marriner. Also in 1998, he sang Vasek in a new production of The Bartered Bride under Bernard Haitink for the Royal Opera and made his debut at the Munich Festival as Nerone (L'incoronazione di Poppea) and in recital (Winterreise at the Cuvilliés Theatre). In 1999, he made his debut with the Vienna Philharmonic Orchestra under Sir Roger Norrington. He works regularly with the pianists Julius Drake, Graham Johnson, Mitsuko Uchida, composer Thomas Ades [9] and Covent Garden music director Antonio Pappano. Other partners at the piano have included Leif Ove Andsnes, Havard Gimse, Saskia Giorgini, and Lars Vogt.

In 2004, Bostridge was made CBE for his services to music. He is an Hon RAM, honorary fellow of Corpus Christi College, St John's College, and Wolfson College Oxford, and was awarded an honorary doctorate by the University of St Andrews in 2003.[10] He was Humanitas Professor of Classical Music and Education at the University of Oxford, 2014-15. He gave the inaugural Nicholas Breakspear lecture, "Classical Attitudes: Latin and music through the ages" at the University of Trondheim in 2015; and the annual BIRTHA lecture, "Humanity in Song: Schubert's Winter Journey" at the University of Bristol in the same year. He delivered the Lincoln Kirstein Lecture, "Song and Dance", at NYU in 2016.

Bostridge had his own year-long Perspectives series at Carnegie Hall in 2005/6, and a twelve-month residency at the Barbican in 2008, "Homeward Bound". He has had a Carte Blanche season at the Concertgebouw and further artistic residencies in Luxembourg, Hamburg, the Schubertiade Schwarzenberg and the Wigmore Hall.

On 11 November 2009 Bostridge sang Agnus Dei from Benjamin Britten's War Requiem, at the Armistice Day service in Westminster Abbey. This uses the words of war poet Wilfred Owen's "At a Calvary near the Ancre". The service marked the loss of the WWI generation, whose last members died earlier the same year. Bostridge performed Kurt Weill's anti-war Four Walt Whitman Songs in 2014. He also has a long history with directing and performing The Threepenny Opera.

In 2013, he performed as part of the Barbican Britten centenary festival in London, and released a new recording of the composer's War Requiem.[2]

Bostridge was for a time the music columnist for Standpoint magazine, the monthly publication launched in 2008 "to celebrate Western civilisation"; he continues to serve on the magazine's advisory board. He is a Youth Music Ambassador, a patron of the Music Libraries Trust and of the Macmillan Cancer Support Guards Chapel Carol Concert.

A collection of his writings on music, A Singer's Notebook, was published by Faber and Faber in September 2011. It was described by philosopher Michael Tanner, in BBC Music Magazine: "A consistently lively, learned, urbane and passionate book, once opened not likely to be closed until you have read it all."

His book Schubert's Winter Journey: Anatomy of an Obsession was published by Faber and Faber in the UK and by Knopf in the US in January 2015. It will be published in German, Finnish, Dutch, Korean, Japanese, Italian, Swedish, Polish, Chinese, French and Spanish editions. It won the Duff Cooper Prize for non-fiction for 2015.

In 1992 Bostridge married the writer and publisher Lucasta Miller,[1] and they have a son and a daughter.[2] His brother is the biographer and critic Mark Bostridge. They are great-grandchildren of John Joyce, "Tiny Joyce", a goalkeeper who played for Tottenham Hotspur before the First World War.[11]

He lists his hobbies as reading, cooking, and looking at pictures.[1]

This article uses material from the article Ian Bostridge from the free encyclopedia Wikipedia and it is licensed under the GNU Free Documentation License.