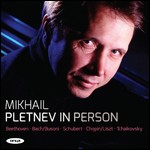 Pletnev was born into a musical family in Arkhangelsk, then part of the Soviet Union; his father played and taught the bayan, and his mother the piano.[1][2] He entered the Central School of Music at the age of 13 and, in 1974, entered the Moscow Conservatory, studying under Yakov Flier and Lev Vlassenko. At age 21, he won the Gold Medal at the VI International Tchaikovsky Competition in 1978, which earned him international recognition and drew great attention worldwide. The following year he made his debut in the United States. He also taught at the Moscow Conservatory.

In 1988, he was invited to perform at the superpower conference in Washington, D.C.. At this conference, he met and befriended Mikhail Gorbachev. Because of this friendship, he gained the support to found two years later the Russian National Orchestra in 1990, the first non-government-supported orchestra in Russia since 1917; Pletnev was its first principal conductor.[3] He and the orchestra made their recording debut on Virgin Classics, releasing Tchaikovsky's Sixth Symphony and Marche Slave in 1991.[4] He stepped down as Principal Conductor in the late 1990s, but remained the orchestra's artistic director.[5] Mikhail Pletnev has been named first guest conductor of the Orchestra della Svizzera Italiana in Lugano, Switzerland from 2008 to 2010.

Pletnev has had an exclusive recording contract with Deutsche Grammophon since 1996. His recordings are mostly of Russian works, though in 2007 he recorded the complete Beethoven symphonies. The first works he recorded were for orchestra, including Tchaikovsky's The Sleeping Beauty, his "Pathétique" Symphony and Manfred Symphony, and Rachmaninoff's Second and Third Symphonies. His piano repertoire is extensive and includes The Seasons, many Scarlatti sonatas, Pictures at an Exhibition as well as his own transcriptions of suites from The Nutcracker and The Sleeping Beauty.

Pletnev's greatest musical hero is Sergei Rachmaninoff, whose performance style both at the piano and on the podium he consciously emulates.[6]

On 6 July 2010 Pletnev, who lives in Thailand, was questioned by Thai authorities in connection with allegations of procuring under-age boys for sexual purposes and alleged statutory rape of a 14-year-old boy. Pletnev, who was released on bail, denied the charges.[7][8] The pianist cancelled appearances at the BBC Proms and the Edinburgh International Festival in order to prepare his defence,[9] but the charges were dropped on 28 September, and he resumed his career two months later.[10]

In February 2011 Pletnev conducted Staatskapelle Dresden in A German Requiem by Brahms in memoriam of the firestorm on Dresden in the Semperoper.[11]

This article uses material from the article Mikhail Pletnev from the free encyclopedia Wikipedia and it is licensed under the GNU Free Documentation License.

Franz Schubert Sinfonie Nr.8 h-moll "Unvollendete"
Update Required To play the media you will need to either update your browser to a recent version or update your Flash plugin.