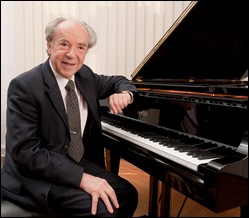 A student of Edwin Fischer, Badura-Skoda first rose to prominence by winning first prize in the Austrian Music Competition in 1947. In 1949, he performed with distinguished conductors including Wilhelm Furtwängler and Herbert von Karajan; over his long career, he has recorded with conductors including Hans Knappertsbusch, Hermann Scherchen, and Georg Szell. Along with his contemporaries Friedrich Gulda and Jörg Demus, he was part of the so-called "Viennese Troika".

He is best known for his performances of works by Mozart, Beethoven and Schubert, but has an extensive repertoire including many works of Chopin and Ravel. Badura-Skoda is well known for his performances on historical instruments, and owns several (his recording of the complete piano sonatas of Schubert is on five instruments from his private collection). A prolific recording artist, Badura-Skoda's over 200 records include many duplicates made to highlight the sound of different pianos: in a 2013 record, he recorded Schubert's last sonata three times on instruments from the 1820s, 1920s, and early 2000s (having already recorded the piece several times before); one of his box sets of the complete piano sonatas of Beethoven similarly includes three different versions of the "Hammerklavier" Sonata. Indeed, he is the only pianist to have not only recorded the complete piano sonatas of Mozart, Beethoven, and Schubert, but to have done so on both historic and modern instruments.

His frequent collaborations with Demus include several duet recordings and performances, and a book on the interpretation of Beethoven's piano sonatas. Badura-Skoda also collaborated with Frank Martin, producing editions and recordings of his music, and several articles on it. In 1974 he completed an extensive and highly acclaimed tour of all the large cities in Southern Africa.[1].

Badura-Skoda, who may be considered as one of the major pianists of our time[2], is also well known for his musical scholarship, often along with his wife Eva Badura-Skoda. The Badura-Skodas edited one of the volumes of Mozart's piano concertos for the Neue Mozart-Ausgabe (Serie V/Werkgruppe 15/Band 5, consisting of K. 453, 456, and 459). They also produced books on the interpretation of the piano music of Mozart and the keyboard music of Bach, which have been translated into several languages. .

This article uses material from the article Paul Badura-Skoda from the free encyclopedia Wikipedia and it is licensed under the GNU Free Documentation License.