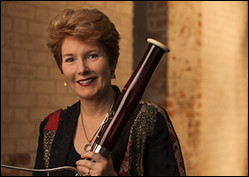 Kim Walker is a bassoonist of Scottish/American origins. She has performed throughout Europe and the US, and in China, and been prominent at leading Music Festivals such as Ravinia, Wolf Trap, Marlboro, Mostly Mozart in the US, Prades, Luzern, Korsholm, Schleswig-Holstein and London Proms in Europe. As a soloist she has performed with the London Philharmonia Orchestra, the Royal Philharmonic, the London Mozart Players, Berlin RIAS orchestra, Württembergisches Kammerorchester Heilbronn, the Orchestre de la Suisse Romande, and many other orchestras under the batons of Oliver Knussen, Gennady Rozhdestvensky, Richard Hickox, Vladimir Ashkenazy, Jane Glover, Arvo Volmer and others.

Walker graduated from Interlochen Arts Academy in 1975, receiving the Young Artist Award, a Presidential National Merit Scholarship award and academic distinctions. She then studied at the Curtis Institute of Music in Philadelphia, with Dr Sol Schoenbach and later with Roger Birnstingl at the Geneva Conservatory in Europe where in 1979 at the Conservatoire de Musique de Geneve she achieved their highest award – "Premier Prix de Virtuosite". She furthered her studies on period instruments, working with Walter Stiftner at the Scuola Cantorum Basel, 1982–83. In 2002 she attended the ENPL (Executive Non-Profit Leadership) course at Stanford’s Graduate School of Business and in 2009 the AICD (Australian Institute of Company Directors) company director’s course.

Following a career performing internationally, she was recruited to serve as Professor of Music at Indiana University, Bloomington. In 2000, she served as Artistic Director of the Summer Music Festival at Indiana University and was invited to serve as Associate Dean in the Office of Vice-Chancellor for Academic Affairs and Dean of the Faculties while still serving as Professor of Music. In 2003, President Myles Brand asked her to serve in a new statewide position as Director of Arts and Cultural Outreach and Associate Dean of Research for Arts and Humanities. After 10 years at Indiana University, Walker became Dean of Music at Sydney Conservatorium of Music in 2004.[1] Walker's career as a bassoonist is well documented with a catalogue of well over 23 solo recordings available.[2] She continues to perform worldwide.[3]

In 2007 Kim Walker was accused of plagiarism. A university investigation found no case to answer and Walker was exonerated. In late 2009 she was accused of having misrepresented her qualifications. University inquiries found there had been "no intention to mislead", and cleared Walker.[4] In 2012, the year her term as Dean ended,[5] Kim Walker filed a multi-million dollar lawsuit against the University of Sydney, seeking damages, international reputation loss and loss of potential earnings resulting from a seven-year tenure dogged by allegations of plagiarism and mismanaged funds.

This article uses material from the article Kim Walker (bassoonist) from the free encyclopedia Wikipedia and it is licensed under the GNU Free Documentation License.