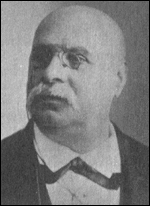 Émile Waldteufel (German for forest devil) was born at 84 Grand'Rue in the centre of Strasbourg. His grandfather and father were both musicians; his mother Flora Neubauer, originally from Bavaria had been a student of Hummel and had met Haydn; she was a keen singer and dancer also.[2] From a Jewish Alsatian family of musicians,[3][4] the original family surname had been Lévy. His father Louis had a respected orchestra, and his brother Léon was a successful performer. When Léon won a place to study violin performance at the Conservatoire de Paris, the family followed him there.

Waldteufel received his first lessons from his father and the local musician Joseph Heyberger; after his arrival in Paris he was able to take elementary classes from Laurent at the Conservatoire de Paris, followed by advanced studies under Marmontel.[2] Among his fellow pupils was Jules Massenet.

The young Émile was obliged to halt his studies and work at the Scholtus piano factory owing to the financial situation of the family, but soon took a room in rue de Bellefond in order to concentrate on composing.[2] During his time at the conservatory, Louis Waldteufel's orchestra became one of the most famous in Paris, and Émile was frequently invited to play at important events.

At the age of 27, Émile became the court pianist of the Empress Eugénie. He also led the orchestra at state balls.[5] His appointment by Napoléon III to the musical direction of the balls led him to participation in the events in Biarritz and Compiègne; at the latter he met many other musicians and artists and also accompanied the Emperor playing the violin.[2]

In 1868 he married Célestine Dufau, a former singer from Toulouse who had appeared at the Opéra-Comique. They had three children, Louis René, Émile René and Berthe.[2]

At the outbreak of the Franco-Prussian War Waldteufel enlisted and was stationed in the Basses-Pyrénées. After the defeat of France the Second French Empire was dissolved and his home town became part of Germany for the rest of his life. After the Empire, the orchestra still played at Presidential balls at the Élysée. At this time only a few members of the French high society knew of Émile; he was nearly 40 before he became better known.

In October 1874 Waldteufel played at an event that was attended by the then Prince of Wales, future King Edward VII of the United Kingdom. The Prince was enthralled by Waldteufel's "Manolo" waltz, and was prepared to make Waldteufel's music known in Britain.[6] A long-term contract with the London-based editor Hopwood & Crew followed. Part of the company belonged to Charles Coote, director of the Coote & Tinney's Band, the first dance orchestra in London. Through these means, Waldteufel's music was played at Buckingham Palace in front of Queen Victoria. Waldteufel dominated the music scene in London and became world-famous. During this period he composed his best known works, many of which are still heard today around the world. He became best known for the waltz "Les Patineurs" (The Ice Skaters), composed in 1882.

Waldteufel gave concerts in several European cities, such as London in 1885, Berlin in 1889, where he enjoyed a friendly rivalry with Johann Strauss, and the Paris Opéra Balls in 1890 and 1891. He continued his career as conductor and writing dance music for the Presidential Balls until 1899 when he retired.

On 12 February 1915 Waldteufel died at his home, 37 rue Saint-Georges in Paris, at the age of 77. He and his wife, who had died the previous year, were buried in Père Lachaise.

Waldteufel composed at and for the piano (often for performance at court) before orchestrating each work.[7] He conducted with a stick rather than the then-customary violin bow. The typical Waldteufel orchestra consisted of strings and a doubled woodwind section, two cornets, four horns, three trombones, and ophicleide or euphonium, along with percussion. Waldteufel's music can be distinguished from Johann Strauss II's waltzes and polkas in that he used subtle harmonies and gentle phrases, unlike Strauss's more robust approach.

Waldteufel's 1886 waltz España is largely based on Chabrier's España but also includes a section from Chabrier's Une Éducation manquée. Chabrier's rhapsody is also the basis of the melody of the 1956 American popular song "Hot Diggity (Dog Ziggity Boom)" by Al Hoffman and Dick Manning, made popular by Perry Como in 1956.

Melody from Estudiantina waltz was used as the tune of an advertising jingle for Rheingold Beer ("My beer, is Rheingold, the dry beer ..."). Estudiantina was played by I Salonisti in James Cameron's 1997 movie Titanic.

This article uses material from the article Émile Waldteufel from the free encyclopedia Wikipedia and it is licensed under the GNU Free Documentation License.

Ludwig van Beethoven Violinkonzert D-Dur op. 61
Update Required To play the media you will need to either update your browser to a recent version or update your Flash plugin.