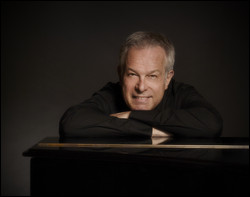 Christoph Prégardien (born 18 January 1956) is a German lyric tenor whose career is closely associated with the roles in Mozart operas, as well as performances of Lieder, oratorio roles, and Baroque music. He is well known for his performances and recordings of the Evangelist roles in Bach's St John Passion and St Matthew Passion.

Born in Limburg an der Lahn, Germany, he began his musical education as a choirboy at the cathedral's boys' choir, the Limburger Domsingknaben. He then studied singing with Martin Gründler and Karlheinz Jarius in Frankfurt at the Hochschule für Musik, with Carla Castellani in Milan, with Alois Treml in Stuttgart, and attended Hartmut Höll's lieder-class.

His orchestral and oratorio repertory spans a wide range from the great Baroque, Classical and Romantic Oratorios to 20th-century works by Britten, Killmayer, Rihm, Stravinsky. Also recognized as an eminent recitalist, he regularly performs at the major recitals venues in Paris, London, Brussels, Berlin, Cologne, Amsterdam, Salzburg, Zurich, Vienna, Barcelona and Geneva, as well as during his concert tours throughout Italy, Japan and North America. He regularly collaborates with piano partners Michael Gees and Andreas Staier.

He has made over 120 recordings, on major labels such as BMG, EMI, Deutsche Grammophon, Philips, Sony, Erato and Teldec. His recordings of German Lieder have been highly acclaimed by the public and press, and have received international awards, including the Orphée d'Or de l'Academie du Disque Lyrique, the Edison Award, and others. He took part in the project of Ton Koopman and the Amsterdam Baroque Orchestra & Choir to record Bach's complete vocal works.

This article uses material from the article Christoph Prégardien from the free encyclopedia Wikipedia and it is licensed under the GNU Free Documentation License.