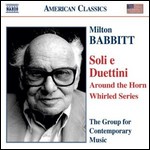 Milton Byron Babbitt (May 10, 1916 –January 29, 2011) was an American composer, music theorist, and mathematician. He was particularly noted for his serial and electronic music.

Babbitt was born in Philadelphia, Pennsylvania (Barkin & Brody 2001) to Albert E. Babbitt and Sarah Potamkin. He was raised in Jackson, Mississippi, and began studying the violin when he was four but soon switched to clarinet and saxophone. Early in his life he was attracted to jazz and theater music. He was making his own arrangements of popular songs at seven, and when he was thirteen, he won a local songwriting contest.

Babbitt's father was a mathematician, and it was mathematics that Babbitt intended to study when he entered the University of Pennsylvania in 1931. However, he soon left and went to New York University instead, where he studied music with Philip James and Marion Bauer. There he became interested in the music of the composers of the Second Viennese School, and went on to write a number of articles on twelve tone music including the first description of combinatoriality and a serial "time-point" technique. After receiving his bachelor of arts degree from New York University College of Arts and Science in 1935 with Phi Beta Kappa honors, he studied under Roger Sessions, first privately and then later at Princeton University. At the University he joined the music faculty in 1938 and received one of Princeton's first Master of Fine Arts degrees in 1942 (Barkin & Brody 2001). During the Second World War Babbitt divided his time between mathematical research in Washington, DC, and Princeton, where he became a member of the mathematics faculty from 1943 to 1945 (Barkin & Brody 2001).

In 1958, Babbitt achieved unsought notoriety through an article in the popular magazine High Fidelity (Babbitt 1958). Babbitt said his own title for the article was "The Composer as Specialist" (as it was later published several times, including in Babbitt 2003, 4854), and "The editor, without my knowledge andthereforemy consent or assent, replaced my title by the more 'provocative' one: 'Who Cares if You Listen?' a title which reflects little of the letter and nothing of the spirit of the article" (Babbitt 1991, 17).

More than 30 years later, he commented that, "For all that the true source of that offensively vulgar title has been revealed many times, in many ways, eveneventuallyby the offending journal itself", he was "still ... far more likely to be known as the author of 'Who Cares if You Listen?' than as the composer of music to which you may or may not care to listen" (Babbitt 1991, 17).

Babbitt later became interested in electronic music. He was hired by RCA as consultant composer to work with their RCA Mark II Synthesizer at the Columbia-Princeton Electronic Music Center (known since 1996 as the Columbia University Computer Music Center), and in 1961 produced his Composition for Synthesizer. Babbitt was less interested in producing new timbres than in the rhythmic precision he could achieve using the Mark II synthesizer, a degree of precision previously unobtainable in live performances (Barkin & Brody 2001).

Babbitt continued to write both electronic music and music for conventional musical instruments, often combining the two. Philomel (1964), for example, was written for soprano and a synthesized accompaniment (including the recorded and manipulated voice of Bethany Beardslee, for whom the piece was composed) stored on magnetic tape.

From 1985 until his death he served as the Chairman of the BMI Student Composer Awards, the international competition for young classical composers. Milton Babbitt died in Princeton, New Jersey on January 29, 2011 at the age of 94 (Kozinn 2011; Anon. 2011b).

Wikiquote has a collection of quotations related to: Milton Babbitt

This article uses material from the article Milton Babbitt from the free encyclopedia Wikipedia and it is licensed under the GNU Free Documentation License.