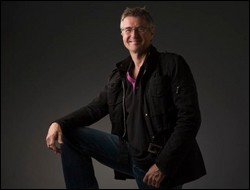 Goodwin was born in Warwick. He studied oboe with Janet Craxton and, following his graduation from the University of Nottingham with a degree in composition, specialized in contemporary oboe techniques and the baroque oboe at the Guildhall School of Music and Drama in London. He continued his studies in Vienna with Jurg Schäftlein.

Goodwin was recognized as one of the worlds foremost early oboe specialists, playing all periods of music on historical oboes, and was principal oboist of The English Concert and the London Classical Players. He has made many solo and concerto records.

In 1996 he made the decision to give up his oboe career and dedicate himself solely to conducting. He subsequently studied conducting in Helsinki with Jorma Panula, and took up posts with The Academy of Ancient Music (associate conductor), and the English Chamber Orchestra (principal guest conductor). Paul Goodwin has become one of Britain's most versatile conductors, renowned for his historically informed interpretations of baroque, classical and romantic music, while also being a great advocate of contemporary music.

He works closely with the Academy of Ancient Music, with whom he has toured extensively and made recordings of Heinrich Schütz' choral music, Mozart's singspiel Zaide and two discs of music by Sir John Tavener he commissioned for the AAM. Three of these CDs have been nominated for Grammy (US) and Gramophone Awards (UK). Subsequent AAM commissions were pieces by David Bedford, John Woolrich and, most recently, Thea Musgrave.

Paul is one of the principal guest conductors with the Kammerorchester Basel, with whom he performs both on modern and period instruments in a wide range of repertoire from J. S. Bach to Mark Anthony Turnage. Paul was the Principal Guest Conductor of the English Chamber Orchestra for six years, collaborating with such artists as Kiri Te Kanawa, Joshua Bell, Maria João Pires, Mstislav Rostropovich and Magdalena Kožená. He has also recorded CDs of Amy Beach and a highly acclaimed CD of Elgar's Nursery Suite for Harmonia Mundi, France.

Goodwin's recent successes have included Iphigenie en Tauride at the Komische Oper Berlin, The Rape of Lucretia at the Teatro Real Madrid and Orlando (opera)at Opera Australia. Past highlights include Mozart's Nozze di Figaro and Il Re Pastore at Opera North, Idomeneo at the Graz Opera, The Magic Flute at the Aalto Theatre in Essen, Monteverdi's L'incoronazione di Poppea in Athens, Handel's Orlando (opera) at the Flanders Opera and Haydn's L'anima del filosofo ossia Orfeo ed Euridice in Madrid.

On educational projects he has worked with both the National Youth Orchestra of the Netherlands (NJO) and the Spanish National Youth Orchestra, the Britten-Pears Orchestra, the European Union Baroque Orchestra and with the orchestras of the Royal College of Music (RCM) and Royal Academy of Music (RAM), and the Royal Conservatory of The Hague. Paul Goodwin is a regular visiting conductor for the Queen Elisabeth Competition Brussels. He has been appointed the Music Director and Conductor of the Carmel Bach Festival, from the 2011 season.

Paul Goodwin was awarded the Handel Music Prize of the City of Halle (Saale) in 2007 in recognition of his extraordinary services to performances of works by George Frederic Handel.

He has recorded CDs of both Handel's opera Lotario and the complete Riccardo Primo, and Handel's great English oratorio Athalia. He is also a regular guest conductor with the Deutsche Radio Philharmonie Saarbrücken Kaiserslautern and has recorded four discs: one of Christmas music from Praetorius to Britten and another of Richard Strauss. Others include orchestral music of Igor Stravinsky and a disc of Karl Amadeus Hartmann.

This article uses material from the article Paul Goodwin from the free encyclopedia Wikipedia and it is licensed under the GNU Free Documentation License.