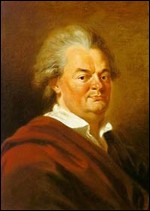 born on 24/3/1739 in Obersontheim, Baden-Württemberg, Germany

He entered the University of Erlangen in 1758 as a student of theology. He led a dissolute life, and after two years' stay was summoned home by his parents. After attempting to earn a livelihood as private tutor and as assistant preacher, his musical talents gained him the appointment of organist in Geislingen an der Steige, and subsequently in Ludwigsburg; but as a consequence of his wild life and blasphemy, found expressed in a parody of the litany, he was expelled from the country.[1]

He then visited in turn Heilbronn, Mannheim, Munich and Augsburg. In Augsburg, he made a considerable stay, began his Deutsche Chronik (German Chronicle, 1774-1778) and eked out a subsistence by reciting from the latest works of prominent poets. Owing to a bitter attack upon the Jesuits, he was expelled from Augsburg and fled to Ulm, where he was arrested in 1777 and confined in the fortress of Hohenasperg.[1]

Here he met with lenient treatment, and he spent the time by a study of mystical works and in composing poetry. His Sämtliche Gedichte (Complete Poems) appeared in two volumes at Stuttgart in 1785/1786 (new edition by Gustav Hauff, Leipzig, 1884, in Reclams Universal-Bibliothek); in this collection most of the pieces are characterized by the "Sturm und Drang" period.[1]

He was set free in 1787 by Frederick the Great, king of Prussia, and expressed his gratitude in "Hymnus auf Friedrich den Grossen" ("Hymn to Frederick the Great"). Schubart was now appointed musical director and manager of the theatre at Stuttgart, where he continued his Deutsche Chronik and began his autobiography, Schubarts Leben und Gesinnungen ("Schubart's Life and Thoughts", 2 vols, 1791-1793), but he died before its completion in Stuttgart. His Gesammelte Schriften und Schicksale (Collected Writings and Fates) appeared in 8 volumes (Stuttgart, 1839-1840).[1]

This article uses material from the article Christian Friedrich Daniel Schubart from the free encyclopedia Wikipedia and it is licensed under the GNU Free Documentation License.