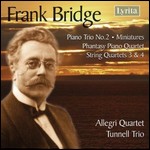 Bridge was born in Brighton and studied at the Royal College of Music in London from 1899 to 1903 under Charles Villiers Stanford and others. He played the viola in a number of string quartets, most notably the English String Quartet (along with Marjorie Hayward), and conducted, sometimes deputising for Henry Wood (Payne, Hindmarsh, and Foreman 2001), before devoting himself to composition, receiving the patronage of Elizabeth Sprague Coolidge (Banfield 1986, 62–86; Bray 1977, passim).

According to Benjamin Britten, Bridge had strong pacifist convictions, and he was deeply disturbed by the First World War, although the extent of his pacifism has been questioned in recent scholarship. During the war and immediately afterwards, Bridge wrote a number of pastoral and elegiac pieces that appear to search for spiritual consolation; principal among these are the Lament for strings, Summer for orchestra, A Prayer for chorus and orchestra, and a series of pastoral piano works. The Lament (for Catherine, aged 9 "Lusitania" 1915), for string orchestra, was written as a memorial to the sinking of the RMS Lusitania (Cerabona 2014). The piece was premiered by the New Queen's Hall Orchestra, conducted by the composer, on 15 September, at the 1915 Proms, as part of a programme of "Popular Italian music", the rest of which was conducted by Henry Wood (Anon. 1915; Anon. 2014).

Bridge privately taught Benjamin Britten, who later championed his teacher's music and paid homage to him in the Variations on a Theme of Frank Bridge (1937), based on a theme from the second of Bridge's Three Idylls for String Quartet (1906). However, Bridge was not widely active as a teacher of composition, and his teaching style was unconventional – he appears to have focussed on aesthetic issues, idiomatic writing, and clarity, rather than exhaustive technical training. Britten spoke very highly of his teaching, saying famously in 1963 that he still felt he hadn't "yet come up to the technical standards" that Bridge had set him (Britten 1991, 4:204n12). When Britten left for the United States with Peter Pears in 1939, Bridge handed Britten his Giussani viola and wished him 'bon voyage and bon retour'; Bridge died in 1941 without ever seeing Britten again (Kildea 2013, 149).

The earliest extant works are a series of substantial chamber works produced during his studies with C.V. Stanford at the Royal College of Music, along with a number of shorter works in various genres. Bridge completed his first major orchestral score, a Symphonic Poem (sometimes referred to as Mid of the Night), shortly after completing his studies. Brahms, Beethoven, Tchaikovsky, Franck, and Fauré are notable influences on this period (Huss 2015, 11).

The works completed in the following years suggest a search for a more mature and expressive idiom, culminating in the tumultuous First String Quartet and a series of Phantasies for chamber ensembles. His orchestral idiom developed more gradually, reaching a new maturity in The Sea of 1911, which was to become his most popular and successful orchestral work (Payne, Hindmarsh, and Foreman 2001), receiving frequent performances at the Henry Wood Promenade Concerts during his lifetime.

In the period leading up to the First World War Bridge demonstrates an interest in more noticeably modernist tendencies, most notably in Dance Poem of 1913, which suggests the influence of Stravinsky and Debussy. During the war period, his exploration generally took more moderate forms – most often a pastoralism influenced by impressionism – although work such as the Two Poems for orchestra and several piano pieces display significant developments in his harmonic language, specifically towards a coloristic, non-functional use of harmony, and a preference for harmony derived from symmetrical scales such as whole tone and octatonic. During the same period Bridge completed two of his most successful chamber works, the Second String Quartet and Cello Sonata (Payne1984,).

Bridge's idiom in the wartime works tends towards moderation, but after the war his language developed significantly, building on the experiments with impressionist harmony found in the wartime piano and orchestral music. Bridge's technical ambitions (documented in his correspondence) prompted him to attempt more complex, larger works, with more advanced harmonic elements and motivic working (Huss 2015, 127). Several of the resulting works have some expressive connections with the First World War, which appears to have influenced the mood of the Piano Sonata, and certainly Oration. However, as Huss has pointed out (drawing on Leonard Meyer's comments on direct causation theories in Meyer 1967,), it is inadvisable to identify the war as the primary stimulant for the development of a modernist language (Huss 2015, 118–19).

During the 1920s Bridge pursued his ambitions to write more serious, substantial works. The Piano Sonata was the first major work to showcase his mature, post-tonal language on a substantial scale. This language is developed and used more effectively in the Third String Quartet, which sparked a series of major orchestral and chamber works, several of which rank among Bridge's greatest (Huss 2015, 159; Payne1984,).

A final group of works followed in the late 1930s and early 40s, including the Fourth String Quartet, the Phantasm for piano and orchestra, Oration for cello and orchestra, the Rebus Overture, and the first movement of a projected Symphony for strings (Payne, Hindmarsh, and Foreman 2001).

Although he was not an organist, nor personally associated with music of the English Church, his short pieces for organ have been among the most performed of all his output (Hindmarsh 1980).

Bridge was frustrated that his later works were largely ignored while his earlier "Edwardian" works continued to receive attention (Hindmarsh 1980).

This article uses material from the article Frank Bridge from the free encyclopedia Wikipedia and it is licensed under the GNU Free Documentation License.