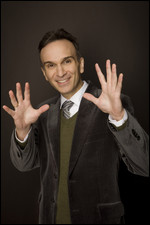 Gil Shaham was born in Urbana, Illinois, while his parents, Israeli scientists, were on an academic fellowship at the University of Illinois. His father Jacob was an astrophysicist,[1] and his mother, Meira Diskin, was a cytogeneticist. His sister is the pianist Orli Shaham. His brother Shai Shaham is the head of the Laboratory of Developmental Genetics at Rockefeller University.[2] Gil Shaham is a graduate of the Horace Mann School in Riverdale, New York. The family returned to Jerusalem when Gil was two. At the age of seven, Shaham began taking violin lessons from Samuel Bernstein at the Rubin Academy of Music in Jerusalem and received annual scholarships from the America-Israel Cultural Foundation.[3]

In 1981, Gil Shaham debuted with the Jerusalem Symphony and the Israel Philharmonic while he was studying with Haim Taub. Later that year, he attended Aspen Music School in Colorado, studying with Dorothy DeLay and Jens Ellermann.[3] Later in 1982 after taking first place in Israel's Claremont Competition, he became a scholarship student at Juilliard. He has also studied at Columbia University.[3]

Shaham is married to the Australian-born violinist Adele Anthony. They have three children, Elijah, Ella Mei and Simon. Gil Shaham currently lives in New York City with his family.[3]

At age 10, Shaham debuted as soloist with the Jerusalem Symphony, conducted by the violinist Alexander Schneider. Less than a year later, Shaham performed with Israel's foremost orchestra, the Israel Philharmonic, which was conducted by Zubin Mehta. At age 11, in 1982, Shaham won first prize in the Claremont Competition and was admitted to the Juilliard School in New York, where he studied with Dorothy DeLay and Hyo Kang. In addition, both he and his younger sister, the pianist Orli Shaham, attended Columbia University.

Shaham's career improved, in 1989, when he was called upon to replace an ailing Itzhak Perlman for a series of concerts with Michael Tilson Thomas and the London Symphony Orchestra. Taking time out from his studies at the Horace Mann School (where he was a senior), he flew to London,[4] then performed the Bruch and Sibelius violin concertos.

In 1990, Shaham received the Avery Fisher Career Grant. In 1992, he was awarded the Premio Internazionale of the Accademia Chigiana in Siena.

Shaham plays a Stradivarius violin from the "long pattern" period, the "Comtesse de Polignac" of 1699. It was offered to Shaham on loan, in 1989, by the Stradivarius Society of Chicago.

This article uses material from the article Gil Shaham from the free encyclopedia Wikipedia and it is licensed under the GNU Free Documentation License.