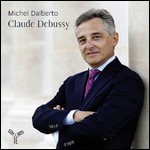 Dalberto was born in Paris into a non-musical family. He began studying the piano at the age of three and a half.[1] When he was twelve, he was introduced to Vlado Perlemuter (a favourite pupil of Alfred Cortot), and entered his class at the Paris Conservatoire in 1969 where he completed his studies over a period of nine years.

From 1990 until 2005, Michel Dalberto was Artistic Adviser of Les Arcs Academy-Festival in Bourg-Saint-Maurice, Savoie. Between 1991 and 2009, he served as Chairman of the Jury of the Clara Haskil International Piano Competition. In May 2011, he was appointed Professor at the Paris Conservatoire.[3]

Michel Dalberto was awarded the Knight of the Ordre National du Mérite by the French Government in 1996.

Dalberto's first recording — two piano sonatas by Schubert — was awarded the Grand Prize of the Academy Charles Cros. He has recorded the complete piano works of Schubert (14 CDs on Denon). Among other recordings are the Grieg Concerto in A minor and Richard Strauss Burleske in D minor with the London Philharmonia and Jean-Bernard Pommier, a "live" recording of the Schumann Concerto at the Vienna Festival with the Wiener Symphoniker and Eliahu Inbal, songs by Chausson with Jessye Norman and two recitals with Barbara Hendricks. Since 1997, he has recorded for the Sony/BMG label the 1st Book of Preludes and Images by Debussy and Mozart Concerti n°20 and 22 with the Ensemble Orchestral de Paris and John Nelson. In June 2004 BMG released a programme of Paraphrases by Liszt on Verdi and Wagner's operas.

This article uses material from the article Michel Dalberto from the free encyclopedia Wikipedia and it is licensed under the GNU Free Documentation License.