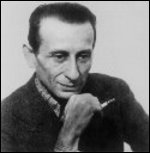 Alexandre Tansman (12 June 1897 15 November 1986) was a Polish-born French composer and virtuoso pianist. He spent his early years in his native Poland, but lived in France for most of his life. His music is primarily neoclassical, drawing on his Polish-Jewish heritage as well as his French musical influences.[1]

Tansman was born and raised in the Polish city of ód during the era when Poland did not exist as an independent state, being part of Tsarist Russia.

The composer wrote the following about his childhood and heritage in a 1980 letter to an American researcher:

"... my father's family came from Pinsk and I knew of a famous rabbi related to him. My father died very young, and there were certainly two, or more branches of the family, as ours was quite wealthy: we had in Lodz several domestics, two governesses (French and German) living with us etc. My father had a sister who settled in Israel and married there. I met her family on my [concert] tours in Israel. ... My family was, as far as religion is concerned, quite liberal, not practicing. My mother was the daughter of Prof. Leon Gourvitch, quite a famous man."

Though he began his musical studies at the ód Conservatory, his doctoral study was in law at the University of Warsaw. Shortly after completing his studies, Tansman moved to Paris, where his musical ideas were accepted and encouraged by mentors and musical influences Igor Stravinsky and Maurice Ravel, as opposed to the more conservative musical climate in his native Poland. While in Paris, Tansman associated with a crowd of foreign-born musicians known as the École de Paris; though Honegger and Milhaud tried to persuade him to join Les Six, he declined, stating a need for creative independence. (Tansman later wrote a biography of Stravinsky that was extremely well received.)

Tansman always described himself as a Polish composer, though he spoke French at home and married a French pianist, Colette Cras, daughter of the French composer Jean Cras.

In 1941, fleeing Europe as his Jewish background put him in danger with Hitler's rise to power, he moved to Los Angeles (thanks to the efforts of his friend Charlie Chaplin in getting him a visa), where he made the acquaintance of Arnold Schoenberg. Tansman composed the score for at least two Hollywood movies: Flesh and Fantasy, starring Barbara Stanwyck, and a biopic of the Australian medical researcher Sister Elizabeth Kenny, starring Rosalind Russell. He scored six films in all. He was nominated for an Academy Award in 1946 for Best Music, Scoring of a Dramatic or Comedy Picture, for Paris Underground (there was a huge field of 21 nominations, and the winner was Miklós Rózsa for Spellbound).

Though Alexandre Tansman returned to Paris after the war, his disappearance from the European musical scene left him behind the musical currents of the time, and no longer fresh in the minds of the public, which slowed his previously fast-rising career. No longer in tune with the French fashions, which had moved on to the avant-garde style, Tansman returned to his musical roots, drawing on his Jewish and Polish background to create some of his greatest works. During this time he began to reestablish connections to Poland, though his career and family kept him in France, where he lived until his death, in Paris, in 1986.

According to the Paris-based Société des Auteurs et Compositeurs, Tansman used the name "Stan Alson" when he composed jazz music.

Today the Alexandre Tansman Competition for promising musicians is held in his honor every other year in his birthplace of ód, in order to promote his music and the local culture. Notable students include Yüksel Koptagel, Turkish composer and pianist.

Tansman was not only an internationally recognized composer, but was also a virtuoso pianist. From 1932-33 Tansman performed worldwide for audiences including Emperor Hirohito of Japan and Mahatma Gandhi; he was regarded as one of the greatest Polish musicians. Later he performed five concert tours in the United States, including as a soloist under Serge Koussevitsky with the Boston Symphony Orchestra, as well as having a thriving career in France as a concert performer.

Tansman's music is written in the French neoclassical style of his adopted home, and the Polish styles of his birthplace, drawing on his Jewish heritage. Already on the edge of musical thought when he left Poland (critics questioned his chromatic and sometimes polytonal writing), he adopted the extended harmonies of Ravel in his work and later was compared to Alexander Scriabin in his departure from conventional tonality.

One of Tansman's letters states that "it is obvious that I owe much to France, but anyone who has ever heard my compositions cannot have doubt that I have been, am and forever will be a Polish composer." After Chopin, Tansman may be the leading proponent of traditional Polish forms such as the polonaise and the mazurka; they were inspired by and often written in homage to Chopin. For these pieces, which ranged from lighthearted miniatures to virtuoso showpieces, Tansman drew on traditional Polish folk themes and adapted them to his distinctive neoclassical style. However, he did not write straight settings of the folk songs themselves, as he states in a radio interview: "I have never used an actual Polish folk song in its original form, nor have I tried to reharmonize one. I find that modernizing a popular song spoils it. It must be preserved in its original harmonization."

He is perhaps best known for his guitar pieces, mostly written for Andrés Segoviain particular the Suite in modo polonico (1962), a collection of Polish dances. Segovia frequently performed the work in recordings and on tour; it is today part of the standard repertoire. Tansman's music has been performed by musicians such as Segovia, Walter Gieseking, José Iturbi, Jane Bathori, Joseph Szigeti, Pablo Casals, Gregor Piatigorsky, Igor Zubkovsky, Christopher Parkening and most recently Chandos Records has increased his profile, with the start of a series of his orchestral works, recorded by the Melbourne Symphony Orchestra, conducted by Oleg Caetani.

Tansman's many hundreds of compositions include:

This article uses material from the article Alexandre Tansman from the free encyclopedia Wikipedia and it is licensed under the GNU Free Documentation License.

Domenico Scarlatti Sonate d-moll K 32
Update Required To play the media you will need to either update your browser to a recent version or update your Flash plugin.