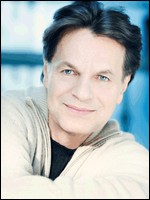 Michel Béroff (born 9 May 1950) is a French pianist and conductor of Bulgarian origin.

In 1967 he made his Paris debut and won 1st prize in the Messiaen competition in Royan. Thereafter he toured extensively internationally and performed with most of the major orchestras and as a recitalist. He completed acclaimed Southern Africa tours in 1972 and 1975.[1]

He has recorded extensively for EMI in works by Liszt, Prokofiev, Stravinsky, J.S. Bach, Debussy, Bartók and Messiaen.

He has also turned to conducting.[2]

This article uses material from the article Michel Béroff from the free encyclopedia Wikipedia and it is licensed under the GNU Free Documentation License.