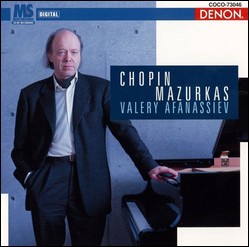 Valery Afanassiev was born in Moscow. He studied piano at the Moscow Conservatory with Emil Gilels and Yakov Zak. In 1969 he was the winner of the Bach Competition in Leipzig, and three years later at the Concours Reine Elisabeth in Brussels. After a tour in Belgium, he decided to seek political asylum in the West and became a citizen of Belgium.

In Germany Afanassiev was first known as a duet partner of Gidon Kremer in chamber music performances. His interpretations of the piano works of Franz Schubert, Ludwig van Beethoven and others have aroused controversy on account of Afanassiev's tempo choices and expressive techniques. A review of his recording of Schubert's last three piano sonatas stated: "the perversity encountered here so angered me that I felt I could not dignify what I found here with any kind of coherent analysis".[1]

Afanassiev has recorded for the Denon, Deutsche Grammophone, and Oehms labels, among others.

Afanassiev has written poetry, a number of novels and stage plays. He is also an orchestral conductor.[2]

This article uses material from the article Valery Afanassiev from the free encyclopedia Wikipedia and it is licensed under the GNU Free Documentation License.