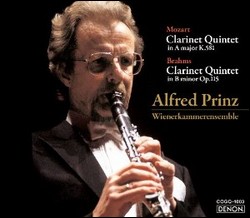 Alfred Prinz (born 1930) is an Austrian composer, clarinetist, and music educator. In 1947 he was awarded a Gold Medal at the Geneva Music Competition and in 1971 he won a composition award from the city of Vienna. His compositional output includes 7 symphonies, many concertos, several works for solo piano, songs, and chamber music. In 1998 his Fünf Goethe-Lieder (Five Goethe Songs) were premiered by soprano Caroline Dowd-Higgins for whom Prinz had composed the pieces. As a concert clarinetist, he has performed as a soloist with orchestras throughout the world and performed in concerts of chamber music internationally. He has recorded for Ariola Records, Decca Records, Deutsche Grammophon, His Master's Voice, and the Telarc International Corporation among other record labels.[1]

Born in Vienna, Prinz began studying the clarinet at the age of 9 at the University of Music and Performing Arts, Vienna with Leopold Wlach of the Vienna Philharmonic. He also earned a diploma in piano performance, studying from 1942 with Bruno Seidlhofer. He later studied music composition under Alfred Uhl and conducting under Hans Swarowsky. In 1945, at the age of 15, he became a clarinetist in the Vienna State Opera Orchestra; and was the youngest performer ever to play for that ensemble. He later was principal clarinetist of the Vienna Philharmonic from 1955-1983.

As an educator, Prinz has taught clarinet at the University of Music and Performing Arts, Vienna since 1972. He has been a Visiting Professor at the Jacobs School of Music at Indiana University since 1996. He has given numerous masterclasses at the Mozarteum University of Salzburg and at universities in Finland, Italy, Japan, Switzerland, and the United States.

This article uses material from the article Alfred Prinz from the free encyclopedia Wikipedia and it is licensed under the GNU Free Documentation License.

Johann Wenzel Kalliwoda Allegretto grazioso aus der Sinfonie Nr. 5 h-moll op. 106
Update Required To play the media you will need to either update your browser to a recent version or update your Flash plugin.