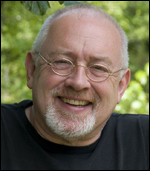 David Wilson-Johnson (born in Northampton on November 16, 1950[1]) is a British operatic and concert baritone.

David Wilson-Johnson studied Modern and Mediaeval Languages at St Catharine's College, Cambridge. As a singer he studied at the Royal Academy of Music in London, where he won the Dove Prize for most distinguished student.

In 1976, Wilson-Johnson made his operatic debut in Henze's We Come to the River at the Royal Opera House at Covent Garden, where he subsequently sang important roles in many operas. In 2006, he decided to retire from the opera. He is still involved in giving concerts worldwide with the major orchestras and recitals with his regular pianist David Owen Norris.

David Wilson-Johnson was Professor of Singing at the Conservatory of Amsterdam from 2005 to 2010, and is a Fellow of the Royal Academy of Music.

David Wilson-Johnson is one of the most sought after baritones in the world today.[2]

He is known affectionately as "Jumbo Johnson" due to his larger frame.[1]

After the 9/11 attacks of 2001 he sang Beethoven's Ninth Symphony under Leonard Slatkin at the 2001 Last Night of the Proms to a worldwide audience of 340 million.[3]

David Wilson-Johnson has made over 250 CDs.

This article uses material from the article David Wilson-Johnson from the free encyclopedia Wikipedia and it is licensed under the GNU Free Documentation License.

Joseph Haydn Sinfonie Nr.39 g-moll
Update Required To play the media you will need to either update your browser to a recent version or update your Flash plugin.