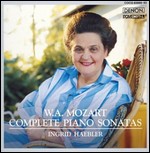 Ingrid Haebler (born June 20, 1926 in Vienna, Austria[1]) is an Austrian pianist. She studied at the Salzburg Mozarteum, Vienna Music Academy, Geneva Conservatory and privately in Paris with Marguerite Long. She toured worldwide. She is best known for a series of recordings from the 1950s to 1980s. Her complete set of Mozart's piano sonatas for the Denon label is still regarded as among the finest sets. Haebler also recorded all of Mozart's piano concertos (most of them twice), often with her own cadenzas - and all of Schubert's sonatas. She was one of several Austrian musicians to experiment early with period instruments, having recorded music of J. C. Bach on a fortepiano. Her recordings of Mozart and Beethoven with violinist Henryk Szeryng are particularly prized.

This article uses material from the article Ingrid Haebler from the free encyclopedia Wikipedia and it is licensed under the GNU Free Documentation License.