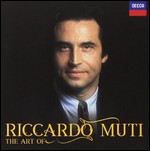 Riccardo Muti, OMRI (Italian: [rikˈkardo ˈmuːti]; born in Naples 28 July 1941) is an Italian conductor. He holds two music directorships: the Chicago Symphony Orchestra and the Orchestra Giovanile Luigi Cherubini. Previously he held posts at the Maggio Musicale in Florence, the Philharmonia Orchestra in London, the Philadelphia Orchestra, the Teatro alla Scala in Milan and the Salzburg Whitsun Festival. Muti has been a prolific recording artist and has received dozens of honours, titles, awards and prizes. He is particularly associated with the music of Giuseppe Verdi.

Muti was born in Naples but he spent his early childhood in Molfetta, near Bari, in the long region of Apulia on Italy's southern Adriatic coast. His father was a doctor in Molfetta and an amateur singer; his mother, a Neapolitan woman with five children.[1]

Muti graduated from Liceo classico (Classical Lyceum) Vittorio Emanuele II in Naples, then studied piano at the Conservatory of San Pietro a Majella under Vincenzo Vitale; here Muti was awarded a diploma cum laude. He was subsequently awarded a diploma in Composition and Conducting by the Giuseppe Verdi Conservatory, Milan, where he studied with the composer Bruno Bettinelli and the conductor Antonino Votto. He has also studied composition with Nino Rota, whom he considers a mentor. He was unanimously awarded first place by the jury of the "Guido Cantelli Competition for Conductors" in Milan in 1967 and became, the next year, principal conductor and music director of the Maggio Musicale Fiorentino, a post he held for eleven years.

Since 1971 he has been a frequent conductor of operas and concerts at the Salzburg Festival, where he is particularly known for his Mozart opera performances. From 1972 Muti regularly conducted the Philharmonia Orchestra in London and in 1973 he was appointed its principal conductor, succeeding Otto Klemperer.[2]

In 1986 Muti became principal conductor of the Filarmonica della Scala, Milan, with which in 1988 he received the Viotti d'Oro and toured Europe. In 1991, after twelve years as music director, he announced his resignation from the Philadelphia Orchestra, effective at the end of the 1991–1992 season.

In 1995 he was the president of the jury of the International Composing Competition "2 Agosto".[3]

Muti has been a regular guest of the Berlin Philharmonic and the Vienna Philharmonic. In 1996 he conducted the latter during Vienna Festival Week and on tour to Japan, Korea, Hong Kong and Germany; he most recently toured with the Vienna Philharmonic to Japan in 2008. Muti has also led the orchestra's globally televised Vienna New Year's Concert on several occasions: in 1993, 1997, 2000, 2004, [4] and 2018.

At the Salzburg Festival

A special relationship connects Muti with the Salzburg Festival, where the conductor debuted in 1971 with Donizetti's Don Pasquale (staged by Ladislav Stros). In the following years Muti has been constantly present at the festival, conducting both numerous concerts with the Vienna Philharmonic Orchestra and opera productions, such as Così fan tutte (staged by Michael Hampe) from 1982 to 1985 and from 1990 to 1991, La clemenza di Tito (staged by Peter Brenner) in 1988 and 1989, Don Giovanni (staged by Michael Hampe) in 1990 and 1991, La traviata (staged by Lluis Pasqual, and designed by Luciano Damiani) in 1995, The Magic Flute in 2005 (staged by Graham Vick) and 2006 (staged by Pierre Audi, stage designed by Karel Appel), Otello (staged by Stephen Langridge) in 2008, Moise et Pharaon (staged by Jürgen Flimm) in 2009, and Orfeo ed Euridice (staged by Dieter Dorn) in 2010. In 2011, Muti will conduct a new production of Verdi's Macbeth, which will be directed by Peter Stein.[5] For the 2017 Salzburg Festival he conducted Aida, with Shirin Neshat seating on the director's chair. In 2018 Muti will conduct Robert Schumann's Symphony No. 2 in C, Op. 61 and Franz Schubert's Mass in E flat, D. 950. Muti also owns a residence close to Salzburg.

From 2007 to 2011, Muti was the principal conductor at Salzburg's Whitsun Festival. He conducted productions of rare Italian operas from the 18th century, and concerts with his Luigi Cherubini Youth Orchestra.

In July 2015, Riccardo Muti's desire to devote even more to the training of young musicians was realised: the first edition of the Riccardo Muti Italian Opera Academy for young conductors, répétiteurs and singers took place with great acclaim at Teatro Alighieri in Ravenna and talented young musicians, as well as an audience of music-lovers from around the world participated. The Academy has as purpose to pass on to young musicians Riccardo Muti's experience and lessons and to make the audience understand in its full complexity the path to accomplish an opera production. [6]

In the United States

In the United States, from 1980 to 1992 Muti was music director of the Philadelphia Orchestra, which he led on numerous international tours. In 1979, he was appointed its music director and, in 1992, conductor laureate. Muti stated that his approach was to remain faithful to the intent of the composer. This meant a change from applying the lush "Philadelphia Sound," created by his predecessors Eugene Ormandy and Leopold Stokowski, to all repertoire; however, many of his recordings with that orchestra largely seem to do away with its hallmark sound, even in the works of such composers as Tchaikovsky, Brahms, and other high romantics. His sonic changes to the orchestra remain controversial. Some felt he turned it into a generic-sounding institution with a lean sound much favored by modern recording engineers. Others believe Muti uncovered the true intention of the works, which had been covered in a silky sheen by Muti's predecessor. Since his departure from Philadelphia, he has made very few guest conducting appearances with the Philadelphia Orchestra, most recently in 2005.[7]

Muti has been a regular and popular guest conductor with the New York Philharmonic. The orchestra's musicians had reportedly been interested – towards the end of the tenures of Kurt Masur and Lorin Maazel, and before Muti took the Chicago post – in having the conductor as their music director, but Muti stated that he had no wish to take on the position.[8][9]

On 5 May 2008, Muti was named the next music director of the Chicago Symphony Orchestra (CSO), effective with the 2010–2011 season, with an initial contract of 5 years. Muti is to conduct a minimum of 10 weeks of CSO subscription concerts each season, in addition to domestic and international tours. He made his CSO debut at the Ravinia Festival in 1973.[10] In August 2009, Muti was said to be named the next music director of the Teatro dell'Opera di Roma, effective December 2010,[11] but the news given by the mayor (and therefore president of Opera di Roma) Gianni Alemanno was not true. Alemanno, instead, announced in October 2011 that Muti accepted an invitation by the Orchestra of Opera di Roma to become a "lifetime conductor" of Opera di Roma.[12]

End of tenure in Milan

In 2003, there were reports of artistic and programming conflicts at La Scala between musical director and principal conductor Muti and general manager Carlo Fontana.[13] Muti did not attend the press conference that announced the 2003–04 season. The appointment in 2003 of Mauro Meli as La Scala's artistic director was intended to calm the conflict between Fontana and Muti.[14]

On 24 February 2005, La Scala governors dismissed Fontana as general manager and named Meli as his successor.[15] The musicians sided with Fontana against Muti at this point in the dispute, and on 13 March, Muti stated that he would refuse to conduct the La Scala orchestra from that point on.[16] On 16 March 2005, the orchestra and staff of La Scala voted overwhelmingly against Muti in a motion of no-confidence.[17] Muti was forced to cancel a concert prior to the vote, and some other productions were disrupted at the theater because of continuing rifts with Fontana's supporters. On 2 April, he resigned from La Scala, citing "hostility" from staff members.[18][19]

On the night of 12 March 2011, Rome's Teatro dell'Opera staged the first in a series of scheduled performances of Verdi's opera Nabucco, conducted by Muti. After the end of the chorus "Va, pensiero", which contains the lyrics "Oh mia patria, sì bella e perduta" ("Oh my country, so beautiful and so lost"), the audience applauded "heartily." Muti, breaking with opera protocol and the strict conventions of composer Verdi himself,[20] turned to the audience and delivered a small speech, referring to the severe budget cuts announced by the Berlusconi government[21] which would particularly affect the funding of the arts. He spoke of the need to keep culture alive in Italy, prompted, as he later stated, by the belief that "killing culture in a country like Italy is a crime against society. Culture is the spiritual glue that holds a people together."[20] He then invited the audience to participate in an encore of the "Va, pensiero" chorus – the invitation and the encore also a break from tradition for an opera performance.[22] The opera audience stood up and sang along with the on-stage chorus.[23] Muti recalls that "80 percent of the audience knew the lyrics" and sang along, while "some members of the chorus were in tears."[20]

On 18 March, the performance of Nabucco was repeated in front of Italian president Giorgio Napolitano and prime minister Silvio Berlusconi. Muti, who had stated that it had been the first time in his life that he conducted chorus and audience together and also the last,[20] on that occasion conducted the Verdi opera in the "orthodox" manner.[23]

Muti is married to Maria Cristina Mazzavillani, the founder and director of the Ravenna Festival.[27] They have two sons and a daughter.

In 2010, Muti wrote an autobiography. The following year, it was translated and published in English as Riccardo Muti: An Autobiography: First the Music, Then the Words. Music critic John von Rhein of the Chicago Tribune described Muti's memoir as "fascinating."[28]

With the Philadelphia, his recordings include the first Beethoven symphony cycle made for compact disc, the symphonies of Brahms and Scriabin, selected works of Tchaikovsky and Prokofiev, as well as less-known works of composers such as Puccini and Busoni.

Muti is considered one of the world's greatest conductors of the operas of Verdi. He also led a series of annual performances of opera in concerts including the works of Verdi, Puccini, Mozart and Wagner. In 1992, Muti conducted performances of Leoncavallo's Pagliacci with Luciano Pavarotti. A recording was also made of these performances.

At La Scala, Muti was noted for exploring lesser-known works of the Classical- and early Romantic-era repertory such as Lodoiska by Cherubini and La vestale by Spontini.

This article uses material from the article Riccardo Muti from the free encyclopedia Wikipedia and it is licensed under the GNU Free Documentation License.