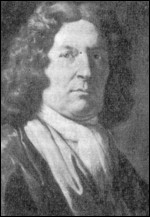 Bernardo Pasquini (7 December 1637 22 November 1710) was an Italian composer of opera and church music. A renowned virtuoso keyboard player in his day, he was probably one of the most important Italian composers for harpsichord between Girolamo Frescobaldi and Domenico Scarlatti, having also made substantial contributions to the Roman opera. One of his harpsichord pieces was transcribed for orchestra by Ottorino Respighi for his suite Gli uccelli.[1]

He was born at Massa in Val di Nievole (Tuscany). (There is no evidence that he was related to Ercole Pasquini, the early 17th-century Roman organist.) He was a pupil of Antonio Cesti and Loreto Vittori in 1650.[2] Later he moved to Rome and entered the service of Prince Borghese; subsequently he became organist of the Basilica di Santa Maria Maggiore. He enjoyed the protection of Queen Christina of Sweden, in whose honour an opera of his, Dov'è amore è pieta to a libretto by Cristoforo Ivanovich, was produced in 1679.

During Alessandro Scarlatti's second stay in Rome (1703-1708), Pasquini and Arcangelo Corelli were frequently associated with Scarlatti in musical performances, especially in connection with the Academy of Arcadia, of which all three were members. Pasquini died at Rome, and was buried in the church of San Lorenzo in Lucina.

Pasquini celebrated the ubiquitous cuckoo in Toccata con lo Scherzo del Cucco, freely and neatly written in florid style in 1702. It is perhaps the best keyboard cuckoo piece in existence for it interestingly imitates the cuckoo's notes, which seems to have been a favourite device in early baroque music.

This article uses material from the article Bernardo Pasquini from the free encyclopedia Wikipedia and it is licensed under the GNU Free Documentation License.

Maurice Ravel Menuet aus "Le tombeau de Couperin"
Update Required To play the media you will need to either update your browser to a recent version or update your Flash plugin.