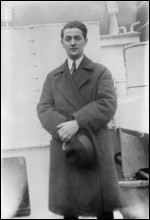 born in 1891 in Suwalki, Podlachien, Poland

Dushkin was born in Suwaki, Poland. He studied at the Conservatoire de Paris as well as with Leopold Auer in New York City and Fritz Kreisler. He made his European debut in 1918 at the age of 23 and six years later his American debut with the New York Symphony Orchestra under Walter Damrosch.

Dushkin cooperated closely with Igor Stravinsky in the composition of the latter's first work for the violin, the Violin Concerto. He played at the concerto's world and US premieres and on the debut Vox recording (VLP 6340) with Stravinsky conducting Lamoureux Orchestra.

Stravinsky also composed his Duo Concertante and his Divertimento, both for violin and piano, to play with Dushkin in concert tours. They also worked together in violin transcriptions of other works, such as the Suite Italienne from Pulcinella.

Dushkin gave the premiere of Ravel's orchestral version of his Tzigane, in Amsterdam on 19 October 1924, with Pierre Monteux conducting the Concertgebouw Orchestra.[1]

He published many arrangements and transcriptions for violin and piano, for example pieces by Isaac Albéniz, Georges Bizet, Rudolf Felber (1891-1978), George Gershwin, Paul Kirman, Modest Mussorgsky, Sergei Rachmaninoff, Igor Stravinsky, Henryk Wieniawski and other composers. They are published in "Samuel Dushkin Repertoire".[3] He was also the author of the "Grave for violin and orchestra by Johann Georg Benda", a musical hoax.[4]

This article uses material from the article Samuel Dushkin from the free encyclopedia Wikipedia and it is licensed under the GNU Free Documentation License.

Louise Farrenc Ouvertüre Nr.1 e-moll op.23
Update Required To play the media you will need to either update your browser to a recent version or update your Flash plugin.