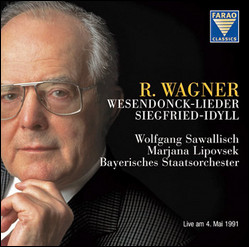 Sawallisch was born in Munich on 26 August 1923. At the age of five, he was already playing the piano and by the time he was ten, he had decided he wanted to become a concert pianist. As a child, he was greatly influenced by Richard Strauss and Hans Knappertsbusch.

At first, he studied composition and pianoforte privately. During the Second World War, he served in the Wehrmacht in France and Italy and in the closing stages of the war was detained at a British POW camp. After the war, he continued his studies at the Munich Hochschule für Musik where he passed his final examination for conducting.[2]

He began his career at the opera house in Augsburg in 1947.[3] At first, he held the position of répétiteur and later became the principal conductor. In 1949, he was awarded the first prize at the Geneva International Music Competition where he accompanied the violinist Gerhard Seitz. In 1952–53 he was the personal assistant to Igor Markevitch at the International Summer Academy of the Mozarteum in Salzburg, Austria.[2]

He was only 30 when he conducted the Berlin Philharmonic Orchestra, where Herbert von Karajan was then the principal conductor. When he debuted at the Bayreuth Festspielhaus conducting Tristan und Isolde in 1957, he was the youngest conductor ever to appear there.

After turning down offers to join the Vienna Philharmonic Orchestra and the New York Metropolitan Opera, Sawallisch became Principal Conductor of the Vienna Symphony in 1960, a post he held for ten years. In 1961, he started conducting the Hamburg Symphony Orchestra and did this for ten years as well. From 1970 to 1980, he was music director of the Orchestre de la Suisse Romande.

From 1971 to 1992, he was Music Director of the Bavarian State Opera, and for several years from 1983, he was concurrently its general manager. For thirty years, he was closely associated with musical events in Munich. Here he conducted practically all of the major Richard Strauss operas, Salome being the sole exception. He also conducted 32 complete Richard Wagner Ring des Nibelungen cycles and is credited with nearly 1200 opera performances in the city alone.

In 1966, Eugene Ormandy, the music director of the Philadelphia Orchestra from 1936 to 1980, had invited Sawallisch to visit him. Sawallisch subsequently made several recordings there, and in 1993 succeeded Riccardo Muti as music director of the Philadelphia Orchestra, where he remained until 2003. From 2003 until his death in 2013, he held the title of Conductor Laureate with the orchestra. He was also Honorary Conductor Laureate of the NHK Symphony Orchestra, Tokyo and for over 30 years he appeared with the orchestra annually in Tokyo. He was the recipient of a Suntory Music Award in 1993.

After his tenure with the Philadelphia Orchestra, Sawallisch returned for guest-conducting appearances in Philadelphia and at Carnegie Hall.[4] However, ill health related to orthostatic hypotension prevented Sawallisch from conducting in subsequent years.[5] In an article in The Philadelphia Inquirer of 27 August 2006, Sawallisch himself stated his retirement from the concert podium:

"It can happen without announcement that my blood pressure is too low. This instability gives me the necessity to finish my career after 57 years of concert and opera conducting."[6]

Earlier, in 1988, he had published his autobiography "Im Interesse der Deutlichkeit" (For the Sake of Clarity) in which he had expounded his views on the role of a conductor.

Sawallisch and his wife Mechthild were married for 46 years until her death on 24 December 1998.[1][7] Cardinal Joseph Ratzinger (later Pope Benedict XVI), a family friend, officiated at her Requiem Mass. She had a son, Jörg, from her previous marriage, whom Sawallisch had adopted. Jörg died in January 2013.

Sawallisch has been acclaimed as an interpreter of the music of Richard Strauss.[9][10][11] As a pianist, he accompanied a number of prominent singers in lieder, including Dietrich Fischer-Dieskau, Dame Elisabeth Schwarzkopf and Dame Margaret Price. He has also been acclaimed for his interpretations of the symphonies of Anton Bruckner.[12]

Sawallisch also recorded, as piano accompanist, Franz Schubert's Winterreise and Robert Schumann's Liederkreis and other songs with Thomas Hampson. One of his most celebrated live concert appearances as a pianist was on 11 February 1994 in Philadelphia, when Sawallisch substituted for the Philadelphia Orchestra at an all-Wagner concert on the night that a severe snow storm prevented much of the orchestra from arriving at the Academy of Music.[13][14][15]

Sawallisch’s recordings for EMI include highly regarded issues of Richard Strauss’s Capriccio and the four symphonies of Robert Schumann with the Staatskapelle Dresden. He made a quadraphonic stereo album (probably the only one ever made) of Mozart’s The Magic Flute in 1973 for EMI, starring Peter Schreier as Tamino, Anneliese Rothenberger as Pamina, Walter Berry as Papageno, Edda Moser as the Queen of the Night, and Kurt Moll as Sarastro. Other recordings (EMI, Orfeo, Phillips, and Sony) include:

His final concerts and recording project in Philadelphia were focused on the music of Robert Schumann and was released on The Philadelphia Orchestra's own recording label in 2003.[16]

This article uses material from the article Wolfgang Sawallisch from the free encyclopedia Wikipedia and it is licensed under the GNU Free Documentation License.