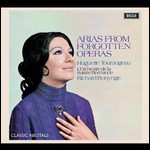 Huguette Tourangeau was born in Montreal, Quebec, and graduated in pedagogy and piano from the Montreal Marguerite-Bourgeoys College, before entering the Conservatoire de musique du Québec à Montréal in 1958, where she was a pupil of Ruzena Herlinger (voice), Otto-Werner Mueller (repertory) and Roy Royal (declamation). In 1962, she was a soloist in Monteverdi's Vespro della Beata Vergine, in Montreal. She made her operatic debut as Mercédès in Carmen, under Zubin Mehta, in 1964, also in Montreal.

In 1964 Tourangeau won the Metropolitan Opera National Council Auditions. The same year, she sang Cherubino in Le nozze di Figaro at the Stratford Festival under Richard Bonynge. During the 1965-66 season, she appeared as Carmen in fifty-six cities throughout North America with the Metropolitan National Company. Around that time, she began a partnership with Dame Joan Sutherland and Bonynge, both on stage and on record. She was heard in Seattle as Malika in Lakmé; London as Urbain in Les Huguenots; and San Francisco as Elisabetta in Maria Stuarda, Adalgisa in Norma, and Prince Orlofsky in Die Fledermaus.

In 1967 and 1968, Tourangeau appeared with the New York City Opera, as Carmen. She made her formal Metropolitan Opera debut on November 28, 1973, as Nicklausse in Les contes d'Hoffmann (with Plácido Domingo in the name part), and later sang Dorabella in Così fan tutte (1975–76), Cherubino in Le nozze di Figaro (opposite Justino Díaz and Judith Blegen, 1976) and Parséïs in Esclarmonde (opposite Sutherland, 1976).

Tourangeau appears in Christopher Nupen's 1973 film Carmen: the Dream and the Destiny, which documents a production at the Hamburg State Opera (directed by Regina Resnik) of the opera in which Placido Domingo plays Don José to her Carmen. In 1978, she was seen in the Met's televised performance of Don Giovanni, as Zerlina, which was her final role at that theatre. Following a Werther, in Lyon, in 1980, Tourangeau bid farewell to the stage.

Other notable roles included Bertario in Rodelinda, at the Holland Festival; in Semiramide (as Arsace), ``Mignon (as Mignon), and Le roi de Lahore (as Kaled), at the Vancouver Opera; and La Grande-Duchesse de Gérolstein, at the Santa Fe Opera.

Tourangeau excelled equally in both light and dramatic roles, possessing a flexible mezzo-soprano adaptable to a wide range of repertoire, from bel canto coloratura trouser-roles to French lyric heroines. She was also regarded as an excellent singing-actress.

In 1977, she became the first recipient of the "Canadian Music Council" artist of the year, and was appointed a Member of the Order of Canada in July 1997. Her husband, Barry Thompson (who died in 2009), was manager of the Vancouver Opera (1975–78) and of the Edmonton Opera Association.

This article uses material from the article Huguette Tourangeau from the free encyclopedia Wikipedia and it is licensed under the GNU Free Documentation License.

Franz Krommer Finale aus der Sinfonie Nr.7 in g-Moll
Update Required To play the media you will need to either update your browser to a recent version or update your Flash plugin.