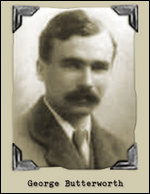 George Sainton Kaye Butterworth, MC (12 July 1885 – 5 August 1916) was an English composer best known for his tone poem The Banks of Green Willow and his settings of A. E. Housman's poems.

Although Butterworth was born in London, his family moved to Yorkshire not so long after his birth. He received his first music lessons from his mother, who was a singer, and he began composing at an early age. As a young boy, he played the organ for services in the chapel of Aysgarth School, where he was a pupil, before gaining a scholarship to his public school. However, his father intended him to be a solicitor, and he attended Eton College, from there continuing to Trinity College, Oxford. While at Trinity he became more focused on music, for there he met the folk song collector Cecil Sharp and composer and folk song enthusiast Ralph Vaughan Williams. Butterworth and Vaughan Williams made several trips to the English countryside to collect folk songs, and the compositions of both were strongly influenced by what they heard. Butterworth was also an expert folk dancer, being particularly keen in the art of Morris dancing.

Vaughan Williams and Butterworth became close friends. It was Butterworth who suggested to Vaughan Williams that he turn a symphonic poem he was working on into his London Symphony. When the manuscript for that piece was lost (having been sent to Fritz Busch in Germany just before the outbreak of war), Butterworth, together with Geoffrey Toye and the critic Edward J. Dent, helped Vaughan Williams reconstruct the work.[1] Vaughan Williams dedicated the piece to Butterworth's memory after his death. Upon leaving Oxford, Butterworth began a career in music, writing criticism for The Times, composing, and teaching at Radley College, Oxfordshire. He also briefly studied at the Royal College of Music where he worked with Hubert Parry among others.

At the outbreak of World War I, Butterworth signed up for service in the British Army. He served in the Durham Light Infantry as a Lieutenant in the 13th Battalion. Butterworth's letters are full of admiration for the ordinary miners of County Durham who served in his platoon. As part of 23rd Division, the 13th DLI was sent into action to capture the western approaches of the village of Contalmaison on the Somme. Butterworth and his men succeeded in capturing a series of trenches, the traces of which can still be found within a small wood. For this action Lt George Butterworth, aged 31, was recommended for the Military Cross by Brigadier Page-Croft.

The Battle of the Somme was now entering its most intense phase. On 4 August, 23 Division was ordered to attack a communication trench known as Munster Alley. The soldiers named the assault trench 'Butterworth Trench' in their officer's honour. In desperate fighting on 45 August, Butterworth and his miners captured and held on to Munster Alley, albeit with heavy losses. That night, amid the frantic German attempts to recapture the position, George Butterworth was shot through the head by a sniper. He was hastily buried by his men in the side of the trench, his body later lost in the fierce bombardments which followed. (The following morning the same trench was the site of Pt. William Short's (Yorkshire Regiment) act of gallantry which was to win him a posthumous Victoria Cross.)

Butterworth's body was never recovered (although his unidentified remains may well lie at nearby Pozieres CWGC Cemetery), and his name appears on the Thiepval Memorial near the Somme. George Butterworth's Banks of Green Willow has become synonymous with the sacrifice of his generation and has been elevated to an anthem for all 'Unknown Soldiers'.

Butterworth did not write a great deal of music, and before and during the war he destroyed many works he did not care for, lest he should not return and have the chance to revise them. Of those that survive, his works based on A. E. Housman's collection of poems A Shropshire Lad are the best known. Many English composers of Butterworth's time set Housman's poetry, including Ralph Vaughan Williams.

In 1911 and 1912, Butterworth wrote two song cycles on Housman's poems. These were eventually published in two cycles, "Six Songs from A Shropshire Lad" and "Bredon Hill and Other Songs". Ten of the songs were first performed while the composer was at Oxford, but the eleventh ("On the Idle Hill of Summer") was not written until he was living in London. They are rarely performed in full today, although six of the songs are often presented together, with "Is My Team Ploughing?" being the most famous. Another, "Loveliest of Trees", is the basis for his 1912 orchestral rhapsody, also called A Shropshire Lad.

The parallel between the often morbid subject matter of A Shropshire Lad, set in the context of the Second Boer War, and Butterworth's subsequent death during the Great War is frequently commented upon. Butterworth's other two short orchestral works, Two English Idylls (1911) and The Banks of Green Willow (1913), are regularly performed. The latter work was premiered by the 24-year old Adrian Boult in 1914 (at the same concert at which the premiere of Vaughan Williams' A London Symphony was given). It is generally thought by those who have studied his work that he showed great talent which would have flourished but for his early death.

This article uses material from the article George Butterworth from the free encyclopedia Wikipedia and it is licensed under the GNU Free Documentation License.