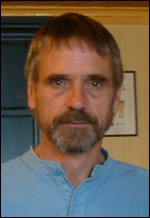 Jeremy John Irons (born 19 September 1948) is an English actor. After receiving classic training at the Bristol Old Vic Theatre School, Irons began his acting career on stage in 1969, and had since appeared in many London theatre productions including The Winter's Tale, Macbeth, Much Ado About Nothing, The Taming of the Shrew, and Richard II. In 1984, he made his Broadway debut in Tom Stoppard's The Real Thing and received a Tony Award for Best Actor.

Irons' first major film role came in the 1981 romantic drama The French Lieutenant's Woman, for which he received a BAFTA nomination for Best Actor. After starring in such films as Moonlighting (1982), Betrayal (1983), and The Mission (1986), he gained critical acclaim for portraying twin gynecologists in David Cronenberg's psychological thriller Dead Ringers (1988). In 1990, Irons delivered another strong performance as a European aristocrat in Reversal of Fortune, and took home multiple awards including an Academy Award for Best Actor. Other notable films have included The House of the Spirits (1993), The Lion King (1994), Die Hard with a Vengeance (1995), Lolita (1997), The Merchant of Venice (2004), Being Julia (2004), and Appaloosa (2008).

Irons is also an occasional television actor. He earned his first Golden Globe Award for his television debut in ITV's series Brideshead Revisited (1981). In 2006, Irons starred opposite Helen Mirren in HBO's miniseries Elizabeth I, for which he received his second Golden Globe Award and an Emmy Award for Best Supporting Actor.

Irons was born in Cowes, Isle of Wight, the son of Barbara Anne Brereton Brymer Sharpe Irons (née Sharpe; 1914-1999), a housewife, and Paul Dugan Irons (1913-1983), an accountant.[1] Part of his maternal ancestry is Irish,[2] and his great-grandfather was one of the first Metropolitan Policemen and later a chartist. Irons has a brother, Christopher (born 1943) and a sister, Felicity Anne (born 1944), both older. He was educated at the independent Sherborne School in Dorset, (c. 1962–1966). He achieved some fame as the drummer and harmonica player (most memorably for his rendition of "Moon River" on harmonica) in a four-man school band called the Four Pillars of Wisdom. They performed, in a classroom normally used as a physics lab, for the entertainment of boys compulsorily exiled from their houses for two hours on Sunday afternoons. He was also known within Abbey House as half of a comic duo performing skits on Halloween and at end-of-term House Suppers. Irons is Catholic.[3]

Irons trained as an actor at the Bristol Old Vic Theatre School and is now president of its fundraising appeal. He performed a number of plays, and busked on the streets of Bristol, before appearing on the London stage as John the Baptist and Judas opposite David Essex in Godspell, which opened at the Round House on 17 November 1971 before transferring to Wyndham's Theatre playing a total of 1,128 performances.[4]

Irons was bestowed an Honorary-Life Membership by the Law Society (University College Dublin) in September 2008, in honour of his contribution to television, film, audio, music and theatre.

He made several appearances on British television, including the children's television series Play Away and as Franz Liszt in the BBC 1974 series Notorious Woman. More significantly he starred in the 13-part adaptation of H.E. Bates' novel Love for Lydia for London Weekend Television (1977), and attracted attention for his key role as the pipe-smoking German student, a romantic pairing with Judi Dench in Harold Pinter's screenplay adaptation of Aidan Higgins' novel Langrishe, Go Down for BBC television (1978).

The role which brought him fame was that of Charles Ryder in the television adaptation of Evelyn Waugh's Brideshead Revisited (1981). Brideshead reunited him with Anthony Andrews, with whom he had appeared in The Pallisers seven years earlier. In the same year he starred in the film The French Lieutenant's Woman opposite Meryl Streep.

Almost as a 'lap of honour' after these major successes, in 1982 he played the leading role of an exiled Polish building contractor, working in the Twickenham area of South West London, in Jerzy Skolimowski's independent film Moonlighting, widely seen on television, a performance which extended his acting range.

In 2005, Irons won both an Emmy award and a Golden Globe award for his supporting role in the TV mini-series, Elizabeth I. A year later Irons was one of the participants in the third series of the BBC documentary series Who Do You Think You Are?[5][6] In 2008 he played Lord Vetinari in Terry Pratchett's The Colour of Magic, an adaptation for Sky One.

On 6 November 2008, TV Guide reported he would star as photographer Alfred Stieglitz with Joan Allen as painter Georgia O'Keeffe, in a Lifetime Television O'Keeffe biopic.[7] Irons also appeared in the documentary for Irish television channel TG4, Faoi Lan Cheoil in which he learned to play the fiddle.

Irons' film debut came with Nijinsky in 1980. He appeared sporadically in films during the 1980s, including the Cannes Palme d'Or winner The Mission in 1986, and in the dual role of twin gynecologists in David Cronenberg's Dead Ringers in 1988. Over the years, Irons has become known for playing somber, often mentally tortured characters. Other films include Danny the Champion of the World (1989), Reversal of Fortune (1990), for which he won the Academy Award for Best Actor, Kafka (1991), Damage (1993), The House of the Spirits (1993) appearing again with Glenn Close and Meryl Streep, Die Hard With a Vengeance (1995), Bernardo Bertolucci's Stealing Beauty (1996), the 1997 remake of Lolita and as the musketeer Aramis opposite Leonardo DiCaprio in the 1998 film version of The Man in the Iron Mask (1998). One of his more memorable performances was when he gave his voice to Scar in The Lion King (1994).

Other roles include playing the evil wizard Profion in the film Dungeons and Dragons (2000). He played Rupert Gould in Longitude (2000). He played the Über-Morlock from the movie The Time Machine (2002). In 2004, Irons played Severus Snape in Comic Relief's Harry Potter parody, "Harry Potter and the Secret Chamberpot of Azerbaijan". Irons and Alan Rickman (who plays Snape in the Harry Potter film series), played the Gruber brothers, Simon and Hans, respectively, in the Die Hard film series.

In 2005, he appeared in the films Casanova opposite Heath Ledger, and Ridley Scott's Kingdom of Heaven. He has co-starred with John Malkovich in two movies; The Man in the Iron Mask (1998) and Eragon (2006), though they did not have any scenes together in Eragon.

One of his best known film roles has turned out to be the voice of Scar in The Lion King (1994). Irons has since provided voiceovers for three Disney World attractions. He narrated the Spaceship Earth ride, housed in the large geodesic globe at Epcot, from November 1994 to July 2007. He was also the English narrator for the Studio Tram Tour: Behind the Magic at the Walt Disney Studios Park at Disneyland Paris. He also voiced H.G. Wells in the English version of the former Disney attraction The Timekeeper. He was also Scar in Fantasmic.

He was originally to star as the Phantom in a 2006 French musical adaptation of Gaston Leroux's novel The Phantom of the Opera, though the project was canceled. He will be the narrator for Val Kilmer and Bill Pullman's brand-new Lewis and Clark movie from Revolution Studios.

He serves as the English-language version of the audio guide for Westminster Abbey in London.

In 1985, Irons directed a music video for Carly Simon and her heavily promoted single, "Tired of Being Blonde". Although the song was not a hit, the video featuring the fast cutting, parallel narratives and heavy use of stylized visual effects that were a staple of pop videos at the time received ample attention on MTV and other outlets.

In 1994 Jeremy Irons had a cameo role in the video for Elastica's hit single 'Connection'. Irons was one of the many naked men sitting down around Elastica as they performed the song. Irons has since claimed that this 3 minute slice of nudity was his most enjoyable work to date.

Irons has contributed to other musical performances, recording William Walton's Façade with Dame Peggy Ashcroft, and in 1987 the songs from Lerner and Loewe's My Fair Lady with Dame Kiri Te Kanawa, released on the Decca label.

He sang a selection of Noël Coward at the 1999 Last Night of the Proms in celebration of the 100th anniversary of Coward's birth.

In 2003 he played Fredrik Egerman in a New York revival of Stephen Sondheim's A Little Night Music, and two years later appeared as King Arthur in Lerner and Loewe's Camelot at the Hollywood Bowl.

Jeremy Irons also has a full song named "Be Prepared" that takes part in the movie The Lion King. However, he actually sang only a section of the song after having vocal problems, Jim Cummings finished the last few lines of the song. This song can be found in the Original Motion Picture Soundtrack of the movie.

Irons performed the Bob Dylan song "Make You Feel My Love" on the 2006 charity album Unexpected Dreams Songs From the Stars.

In 2009 Irons appeared on the Touchstone album Wintercoast, recording a narrative introduction to the album.[8] Recording took place in New York City in February 2009 during rehearsals for his Broadway play Impressionism.

Irons has worked with the Royal Shakespeare Company three times in 1976, 198687 and 2010.[9] In 1984, Irons made his New York debut and won a Tony Award for his Broadway performance opposite Glenn Close in The Real Thing.

After an absence from the London stage for 18 years, in 2006 he co-starred with Patrick Malahide in Christopher Hampton's stage adaptation of Sándor Márai's novel Embers at the Duke of York's Theatre.[10]

He made his National Theatre debut playing Harold Macmillan in Never So Good, a new play by Howard Brenton which opened at the Lyttelton on 19 March 2008.[11][12]

In 2009 Irons appeared on Broadway opposite Joan Allen in the play Impressionism.[13] The play ran through 10 May 2009 at the Gerald Schoenfeld Theater.[13]

Irons married Irish actress Sinéad Cusack in March, 1978. They have two sons, Samuel James Brefni Irons (16 September 1978), who works as a photographer, and Maximilian Paul Diarmuid Irons (17 October 1985), also an actor who appeared in the 2006 Burberry fashion campaign. Both of Irons' sons have appeared in films with their father, Sam in Danny, Champion of the World and Max in Being Julia. Irons now lives in the small town of Watlington in Oxfordshire and the village of Ballydehob, in County Cork in Ireland.

He is also the patron since 2002 of the Thomley Activity Centre,[14] an Oxfordshire non-profit activity centre for disabled children. Irons owns Kilcoe Castle (which he had painted a rusty pink) in County Cork, Ireland, and has become involved in local politics there. He also has another Irish residence in The Liberties, Dublin. Irons is a patron of the Chiltern Shakespeare Company.[15] He is a fan of English football club Portsmouth.[16]

At the 1991 Tony Awards, Irons was one of the few celebrities to wear the recently created red ribbon to support the fight against AIDS, and he was the first celebrity to wear it onscreen.[17][18] He supports a number of other charities, including The Prison Phoenix Trust of which he is an active patron.[19]

In 1998 Irons was named, along with his wife Sinéad Cusack, in a list of the biggest private financial donors to the Labour Party.[20] In 2004 he publicly declared his support for the Countryside Alliance, referring to the hunting ban as an "outrageous assault on civil liberties".[21]

In 2010 Irons starred in a promotional video[22] for The 1billionhungry project -- a worldwide drive to attract at least one million signatures to a petition calling on international leaders to move hunger to the top of the political agenda. [23]

Wikiquote has a collection of quotations related to: Jeremy Irons

This article uses material from the article Jeremy Irons from the free encyclopedia Wikipedia and it is licensed under the GNU Free Documentation License.