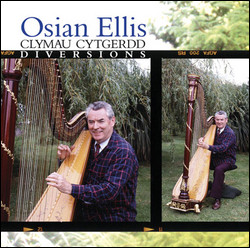 Osian Gwynn Ellis CBE (born 8 February 1928) is a Welsh harpist and composer, known as the first harpist of the Melos Ensemble and for his musical association with Benjamin Britten.

Osian Ellis was born in Ffynnongroyw, Flintshire in 1928. He studied at the Royal Academy of Music with Gwendolen Mason, whom he later succeeded as Professor of Harp from 1959 to 1989. He joined the London Symphony Orchestra in 1961 and was Principal Harpist. He was a member of the Melos Ensemble and also formed the Osian Ellis Harp Ensemble.

Ellis was made Commander of the Order of the British Empire in 1971. He is the Honorary President of the Wales International Harp Festival.[2]

Influence on other musicians

Concertos have been written specially for him by Alun Hoddinott (for the Cheltenham Festival in 1957), William Mathias (for the Llandaff Festival of 1970), Jorgen Jersild (1972), William Alwyn (1979) and Robin Holloway (1985).

Ellis is particularly known for his musical association with Benjamin Britten, with whom he collaborated extensively. Britten wrote the harp part in several of his major pieces with Ellis in mind, particularly A Midsummer Night's Dream, the War Requiem and the Church Parables. Britten also wrote his Harp Suite (Op. 83) for Ellis (1969). In the last few years of Britten's life, when he could no longer accompany Peter Pears on the piano, Britten wrote pieces for Pears and Ellis, including The Death of St Narcissus and A Birthday Hansel.[3] Ellis appears in many first recordings of Britten's pieces, often with Britten himself conducting.

His own compositions have drawn on his Welsh heritage, including settings of Welsh folksongs for tenor and harp and settings of medieval Welsh strict metre poems. Diversions for two harps includes a cerdd dant setting of a Dylan Thomas poem.

His writings include The Story of the Harp in Wales (1991) ISBN 0-7083-1104-0 (a revision of an earlier publication in Welsh), which traces the harp's development and discusses some famous harpists.

This article uses material from the article Osian Ellis from the free encyclopedia Wikipedia and it is licensed under the GNU Free Documentation License.