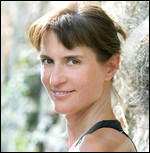 Viktoria Yurievna Mullova (Russian: Виктория Юрьевна Муллова; born 27 November 1959) is a Russian violinist. She is best known for her performances and recordings of a number of violin concerti, compositions by J.S. Bach, and her innovative interpretations of popular and jazz compositions by Miles Davis, Duke Ellington, The Beatles, and others.[1]

Mullova was born in Zhukovsky, near Moscow, in Soviet Russia.[2] After studying at the Central Music School of Moscow and at the Moscow Conservatoire under Leonid Kogan, she won first prize at the 1980 International Jean Sibelius Violin Competition in Helsinki and the Gold Medal at the International Tchaikovsky Competition in 1982.

During a tour of Finland in 1983, Mullova and her lover, Vakhtang Jordania, who posed as her accompanist so they could defect together, left the hotel in Kuusamo, after Jordania told the KGB officer who was watching them that Mullova was too sick from drinking to attend the afterparty. The Stradivari violin owned by the Soviet Union was left behind on the hotel bed. A YLE journalist Jyrki Koulumies,[3][4] accompanied by a photographer Caj Sundman, drove them in a rented car across the border via Haparanda to Luleå, Sweden where they flew to Stockholm.

At that time, the Swedish police treated the young, on-the-run musicians just like any other political defectors from the Eastern Bloc: they suggested that the couple stay in a safehouse over the weekend until the American Embassy opened so they could apply for political asylum upon relocation. So for two days they sat under pseudonyms in a safehouse not even daring to go outside, because their photographs were on the front page of every Swedish and international newspaper. Two days later they arrived in Washington, D.C. with American visas in their pockets.

Life in the West

Mullova has made many recordings including her debut release of the Tchaikovsky and Jean Sibelius violin concertos which was awarded the Grand Prix du Disque.

She formed the Mullova Chamber Ensemble in the mid-1990s. The ensemble has toured Italy, Germany, and the Netherlands and has recorded the Bach violin concertos on Philips Classics. She was nominated for a 1995 Grammy Award for her recording of the Bach Partitas, and she won a 1995 Echo Klassik award, a Japanese Record Academy Award and a Deutsche Schallplattenkritik prize for her recording of the Brahms violin concerto. Her recording of the Brahms B major Trio (no. 1) and Beethoven's Archduke Trio with André Previn and Heinrich Schiff was released in 1995, receiving a further Diapason d'Or.

Mullova plays the Jules Falk Stradivarius from 1723 and a violin made in 1750 by Giovanni Battista Guadagnini. Her bows include a Baroque style bow by a modern maker, a Dodd and a Voirin.

This article uses material from the article Viktoria Mullova from the free encyclopedia Wikipedia and it is licensed under the GNU Free Documentation License.

Franz Schubert Allegretto und Menuetto aus der Sinfonie Nr.3 D-Dur
Update Required To play the media you will need to either update your browser to a recent version or update your Flash plugin.