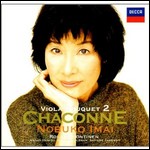 Nobuko Imai (今井 信子, Imai Nobuko, born March 18, 1943 in Tokyo), is a Japanese classical violist with an extensive career as soloist and chamber musician. Since 1988 she has played a 1690 Andrea Guarneri instrument.

Her discography includes more than 30 releases on labels such as BIS, Chandos, DG, EMI, Hyperion, and Philips. She has been a recipient of numerous awards including the Avon Arts Award (1993), Japan's Suntory Music Award (1995) and Mainichi Award of Arts (1996). Toru Takemitsu composed for her a Viola Concerto A String around Autumn in 1989.

This article uses material from the article Nobuko Imai from the free encyclopedia Wikipedia and it is licensed under the GNU Free Documentation License.

Johann Baptist Vanhal Cantabile aus der Sinfonie C-Dur
Update Required To play the media you will need to either update your browser to a recent version or update your Flash plugin.