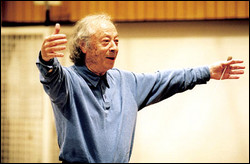 Alberto Zedda (born in Milan, 2 January 1928) is an Italian conductor and musicologist, a specialist of the 19th-century Italian repertoire.

Zedda studied in his native Milan with Antonino Votto and Carlo Maria Giulini, and made his debut there as conductor in 1956, with Il barbiere di Siviglia. He was quickly invited to conduct at most of the opera houses of Italy and began an international career, appearing in Bordeaux, Paris, Vienna, Berlin, London, New York, etc. He was for a time musical director of the Festival della Valle d'Itria in Martina Franca and currently of the Pesaro Festival.

As a musicologist, he is responsible for the revision of numerous works by Vivaldi, Handel, Donizetti, Bellini, Verdi, but most notably Rossini. He is with Philip Gossett, responsible for the complete critical edition of the operas by Rossini and is a committee member of the Rossini Foundation in Pesaro, Italy. He is also renowned for his research on vocal ornamentation and his aim at authentic performing style.

This article uses material from the article Alberto Zedda from the free encyclopedia Wikipedia and it is licensed under the GNU Free Documentation License.

Johann Christoph Schuncke Rondo aus dem Concertino für Horn und Orchester
Update Required To play the media you will need to either update your browser to a recent version or update your Flash plugin.