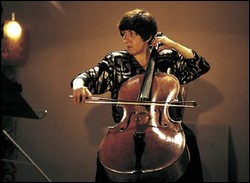 Natalia Gutman (Russian: ) (born November 14, 1942 in Kazan) is a Russian cellist. She began to study cello at the Moscow Music School with R. Sapozhnikov. She was later admitted to the Moscow Conservatory, where she was taught by Rostropovich, amongst others.

Distinguished at important international competitions, she has carried out tours around Europe, America and Japan, being invited as a soloist by great conductors and orchestras. At one notable recital, she was accompanied by Sviatoslav Richter in the Chopin Cello Sonata. Always attentive to music from the 20th century, she regularly performs works by contemporary composers. She has recorded Shostakovich's Cello Concerto for BGM Ariola records and Dvoák's Cello Concerto with Wolfgang Sawallisch conducting the Philadelphia Orchestra for EMI records.

A great supporter of chamber music and contemporary music, she founded the Musikfest Kreuth with her husband, Oleg Kagan, in 1990.

This article uses material from the article Natalia Gutman from the free encyclopedia Wikipedia and it is licensed under the GNU Free Documentation License.

John Field Adagio und Rondo aus dem Klavierkonzert Nr. 4 Es-Dur
Update Required To play the media you will need to either update your browser to a recent version or update your Flash plugin.