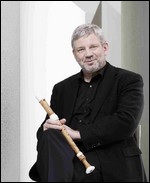 Michael Schneider (born 10 August 1953 in Nordhorn) is a German flautist, recorder player, conductor and academic teacher. He is especially connected with later baroque repertoire such as the works of Telemann, and founded the orchestra La Stagione to perform that repertoire.

Schneider studied flute and recorder at the Musikhochschule Köln. In 1978 he was a winner of the ARD International Music Competition in the category recorder.[1]

For historically informed performances he founded in 1979 the ensemble "Camerata Köln" (Camerata Cologne) and in 1988 the orchestra "La Stagione".[1] He conducted both in performances and many recordings.[2][3][4] They appeared at the Handel Festival in Göttingen, the Handel Festival in Halle, the Bachfest Leipzig, the Schwetzingen Festival and the Schleswig-Holstein Musik Festival, among others.[5]

In 1980 Schneider was appointed professor for recorder at the Hochschule der Künste Berlin. Since 1993 he has been professor of the Musikhochschule Frankfurt, where he established in 2005 a class for "Historische Interpretationspraxis" (historically informed interpretation). Since 2005 he has served as a vice president of the university.[1] In 2011 he appeared with about 50 students and teachers from the university at the Rheingau Musik Festival in Eberbach Abbey, including first a variety of chamber music concerts in smaller halls of the former monastery, performed by a piano quintet, a string quartet and a trumpet trio, and finally a semi-staged presentation of Alessandro Stradella's oratorio San Giovanni Battista in the Basilika.[6][7][8]

He recorded Bach's solo cantatas for bass with Gotthold Schwarz, the Thomanerchor and La Stagione, BWV 56, 82 and 158.[12]

In 2000 Schneider was awarded the Telemann-Preis of Magdeburg. His recording of Telemann's opera Damon with La Stagione was the "Critic's Choice" of Gramophone in 1998.[9]

This article uses material from the article Michael Schneider (conductor) from the free encyclopedia Wikipedia and it is licensed under the GNU Free Documentation License.

Wolfgang Amadeus Mozart "Ruhe sanft, mein holdes Leben" aus der Oper "Zaïde"
Update Required To play the media you will need to either update your browser to a recent version or update your Flash plugin.