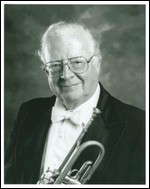 Herseth was born in Lake Park, Minnesota. His father was the band director at the school that Herseth attended, where Herseth got his first trumpet. He then went on to learn from James Greco during the summer of 1937 at the first high school state band camp that Gerald Prescott held at the University of Minnesota. Prescott had heard him play in a regional competition and invited him to play solo cornet in his summer band. Herseth then went on to learn from Boston Symphony Orchestra trumpeters Marcel LaFosse (second trumpet) and Georges Mager (principal trumpet) at the New England Conservatory of Music. Herseth eventually graduated from Luther College in Iowa with a degree in mathematics prior to serving as a musician with the U.S. Navy during World War II.

In a book by Louis Davidson, Herseth lists a few of the players he admired and whose playing most influenced his. They include Louis Davidson, Harry Glantz, and Maurice Andre. Herseth also admired the Swedish tenor Jussi Björling and Frank Sinatra.

For preparation for performances, Herseth keeps up with the fundamentals. He practiced scales, long tones, and nice broad vocalise-type studies each and every day. He used several books for practicing, like the Charlier 36 Etudes, the Walter Smith Top Tones, and the Herbert L. Clarke second and third books. Of course he also practiced difficult things that are coming up, but he tried not to over-practice.

Herseth did not use any particular warmup routine. I do believe in warming up, and as I grow older I find that it takes a little longer to get all the brain cells and all the red corpuscles going. Its a fact of life. You know, a warmup is just a practice session gradually approached - thats really all it is. You try to cover some of the fundamentals, first of all to get a nice freely-produced musical quality sound. And then you go through a few articulations, and gradually extend the range until your top, bottom, and middle registers, articulations, and lungs, are all there.

Herseth used a Bach 1B mouthpiece with a 22 size throat on the C trumpet that he uses 99 percent of the time. On higher pitched trumpets, such as the piccolo, he uses a shallower cup, such as a 1E.

Herseth advised all upcoming trumpet players to practice to their fullest. Without practice, the player is just as good as they were last time they played. As commonly said, practice makes perfect.

His ancestors came from Norway, so in 1977 he visited Norway to see the places where his relatives lived in the municipality of Stange in Hedmark County.

Herseth was widely regarded as one of the greatest orchestral trumpeters of his generation.[2]

Herseth's tenure as principal trumpet spanned the Reiner years, during which the orchestra rose to prominence, due in part to the powerful and precise sound of its brass section. As explained by the Telegraph in London on Sept. 18, 2009, The orchestras rise to fame began with the great Fritz Reiner in the Fifties, but it was during the 22-year reign of the fierce Hungarian Georg Solti that the orchestra became the brawny yet subtle precision instrument that it is today, famed especially for its noble and stupendously powerful brass sound. A Smithsonian profile of Herseth, published Sept. 1, 1994, offered this description: The Chicago has long been recognized as one of the worlds great orchestras, and Adolph Sylvester Herseth has had a major role in the evolution of its distinctive sound. As described in the Chicago Sun-Times, July 22, 2001, For decades Herseth's rich, golden tone and powerful yet expressive playing were a cornerstone of the fabled Chicago Sound. That brass sound drew worldwide attention to the CSO, and propelled the great American orchestras reputation around the globe." According to an entry on the Chicago History Museum's online history of the city, the CSOs "unmistakable sound and high standard of performance helped define the Chicago Symphony Orchestra as a world class institution. It also made Chicago an international center for the study of brass instrument performance."

Regular concert-goers knew him not only by his golden sound, but also by sight; as long-time Chicago Tribune critic John von Rhein wrote in his farewell piece, "He was the man whose face would turn radish-red when he was scaling the trumpet stratosphere or tossing off a rapid scale passage. Where he found the huge volume of air needed to make a notoriously recalcitrant brass instrument soar like that, Herseth wasnt saying. That was part of the Bud Mystique." [3]

Herseth retired in 2001. The position he occupied is now named after him - The Adolph Herseth Principal Trumpet Chair. He died at his home in Oak Park on April 13, 2013, at the age of 91.

This article uses material from the article Adolph Herseth from the free encyclopedia Wikipedia and it is licensed under the GNU Free Documentation License.