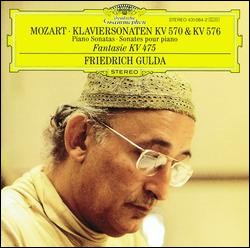 Friedrich Gulda (16 May 1930 – 27 January 2000) was an Austrian pianist and composer who worked in both the classical and jazz fields.

Born in Vienna as the son of a teacher, Gulda began learning to play the piano from Felix Pazofsky at the Wiener Volkskonservatorium, aged 7. In 1942, he entered the Vienna Music Academy, where he studied piano and musical theory under Bruno Seidlhofer and Joseph Marx.

During World War II as teenagers, Gulda and his friend Joe Zawinul would go out and perform forbidden musics – like jazz, in violation of the government's prohibition on the playing of such music (this is mentioned in the documentary film "Friedrich Gulda: So What – A Portrait").

Gulda won first prize at the Geneva International Music Competition in 1946. Initially, the jury preferred the Belgian pianist Lode Backx, but when the final vote was taken, Gulda was the winner. One of the jurors, Eileen Joyce, who favoured Backx, stormed out and claimed the other jurors were unfairly influenced by Gulda's supporters.[1] Gulda began to play concerts worldwide. He made his Carnegie Hall debut in 1950.[2] Together with Jörg Demus and Paul Badura-Skoda, Gulda formed what became known as the "Viennese troika".

Although most renowned for his Mozart and Beethoven interpretations, Gulda also performed the music of J. S. Bach (often on clavichord), Schubert, Chopin, Schumann, Debussy and Ravel. His recordings of Bach's Well Tempered Clavier are well regarded.[3] Apart from the Well Tempered Clavier, Gulda performed very few other pieces by Bach and recorded even fewer. Gulda's later reliance on co-operating with companies whose recording techniques were primitive in comparison to those espoused by more sophisticated rivals stood him in very poor stead with regard to posterity. The rescued Mozart sonata tapes issued on DG are unbelievably bad in terms of recorded technical quality; likewise the Debussy Preludes and Bach recordings of the late 60s and early 70s.

From the 1950s on Gulda cultivated a professional interest in jazz, and in Free improvisation or open music improvisations, writing songs. He also recorded as a vocalist under the pseudonym "Albert Golowin", fooling music critics for years until it was realized that Gulda and Golowin were the same person. He played instrumental pieces, at times combining jazz, free music, and classical music in his concerts. In the late 1960s Gulda recorded the complete Beethoven sonatas.

In 1956, Gulda performed and recorded at Birdland in New York City[4] and at the Newport Jazz Festival.[2] He organized the International Competition for Modern Jazz in 1966,[5] and he established the International Musikforum, a school for students who wanted to learn improvisation, in Ossiach, Austria, in 1968.[6] He once said:[7]

There can be no guarantee that I will become a great jazz musician, but at least I shall know that I am doing the right thing. I don't want to fall into the routine of the modern concert pianist's life, nor do I want to ride the cheap triumphs of the Baroque bandwagon.

In jazz, he found "the rhythmic drive, the risk, the absolute contrast to the pale, academic approach I had been taught."[7] He also took up playing the baritone saxophone.[5]

In addition, Gulda composed "Variations on The Doors' 'Light My Fire'" (aka 'Variationen über "Light My Fire" (von Jim Morrison)' ) for solo piano, and released it in 1971 on Track 11 (LP disc 1, side 2, track 1) of "The Long Road To Freedom (Ein musikalisches Selbstportrat in Form eines Lehrgangs)". An earlier instrumental rock-style piano/bass/drums trio version (sans any of the complex Gulda composed and improvised variations...) of Light My Fire can also be found on Gulda's album As You Like It (1970), an album that also includes standards such as "'Round Midnight" and "What Is This Thing Called Love?", as well as Gulda's classic "Blues For H.G. (dedicated to Hans Georg Brunner-Schwer)."

In the late 1970s and 1980s, Gulda was involved in yearly music festivals, such as the Münchner Klaviersommer – where musical guests coming to perform over the years with him, included Herbie Hancock, Joe Zawinul, and Chick Corea.

In 1980, he wrote his Concerto for Cello and Wind Orchestra, which has been called "as moving as it is lighthearted", in five movements "involving jazz, a minuet, rock, a smidgen of polka, a march and a cadenza with two spots where a star cellist must improvise."[8]

In 1982, Gulda teamed up with jazz pianist Chick Corea, who was between the breakup of Return to Forever and the formation of his Elektric Band. Issued on The Meeting (Philips, 1984), Gulda and Corea communicate in lengthy improvisations mixing jazz ("Some Day My Prince Will Come" and the lesser known, adapted by Miles Davis song "Put Your Foot Out") and classical music (Brahms' "Wiegenlied" ["Cradle song"]).

In the late 1980s and 1990s, organist/MIDI keyboardist Barbara Dennerlein also studied with and performed with Gulda (Reference: DVD "I Love Mozart, I Love Barbara" [2].

In the late 1990s, Gulda organised rave parties, where he performed with the support of several DJs and Go-Go dancers.

These unorthodox practices along with his refusal to sometimes follow clothing conventions (he was notoriously described as resembling, in one South German concert, "a Serbian pimp") or announce the program of his concerts in advance earned him the nickname "terrorist pianist".[2] In 1988, he cancelled a performance after officials of the Salzburg Festival objected to his including jazz musician Joe Zawinul on the program.[2] When the Vienna Music Academy awarded him its Beethoven Ring in recognition of his performances, he accepted it but then later reconsidered and returned it.[6] To promote a concert in 1999, he announced his own death in a press release so that the concert at the Vienna Konzerthaus could serve as a resurrection party.[6]

Phillips Records included Gulda in its Great Pianists of the 20th Century CD box set, which came out in 1999.[9] His piano students included Martha Argerich, who called Gulda "my most important influence,"[10] and the conductor Claudio Abbado.[11]

Gulda died of heart failure at the age of 69 on 27 January 2000 at his home in Weissenbach, Austria.[6] Gulda is buried in the cemetery of Steinbach am Attersee, Austria.

Gulda was married twice, firstly to actress Paola Loew (1956–1966) with whom he had two sons, David Wolfgang and Paul, and secondly to Yuko Wakiyama (1967–1973) with whom he had another son, Rico. Both Paul and Rico became accomplished pianists. In 1975 Gulda began a relationship with the oratorio singer Ursula Anders which lasted until his death.[12]

In 2007 a documentary film for television was made about his life, So what?! – Friedrich Gulda.[13]

This article uses material from the article Friedrich Gulda from the free encyclopedia Wikipedia and it is licensed under the GNU Free Documentation License.

Friedrich Gernsheim Präludium Nr. 5 Allegretto vivace e leggiero aus 6 Präludien für Klavier op.2
Update Required To play the media you will need to either update your browser to a recent version or update your Flash plugin.