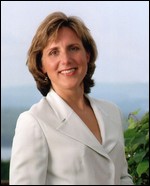 Dawn Upshaw (born July 17, 1960) is an American soprano. The recipient of several Grammy Awards and Edison Prize-winning discs, she performs both opera and art song, and in repertoire from Baroque to contemporary. Many composers, including Osvaldo Golijov, John Harbison, Esa-Pekka Salonen, John Adams, and Kaija Saariaho, have written for her, and her artistic achievements are extensive. In 2007, she was awarded a MacArthur Fellowship.[1]

Dawn Upshaw was born in Nashville, Tennessee. She began singing while attending Rich East High School singer in Park Forest, Illinois and was the only female ever promoted to the top choir (the Singing Rockets) as a sophomore, according to choir director Douglas Ulreich. She received a B.A. in 1982 from Illinois Wesleyan University, where she studied voice with the late Dr. David Nott. She went on to study voice with Ellen Faull at the Manhattan School of Music in New York, earning her M.M. in 1984. She also attended courses given by Jan DeGaetani at the Aspen (Colorado) Music School. She was a winner of the Young Concert Artists International Auditions (1984) and the Walter M. Naumburg Competition (1985), and was a member of the Metropolitan Opera Young Artists Development Program. Since her start in 1984, Upshaw has made more than 300 appearances at the Metropolitan Opera.

She came to international fame with her million-selling recording (1992), with David Zinman, of the hauntingly powerful Symphony No 3 by Henryk Górecki, known as the Symphony of Sorrowful Songs (Symfonia pieni aosnych).

In the past decade, she has premiered more than twenty-five new works and has embraced several works created for her, including the Grawemeyer Award-winning opera LAmour de Loin by Kaija Saariaho, The Great Gatsby by John Harbison, the nativity oratorio El Niño by John Adams, and Osvaldo Golijov's highly acclaimed chamber opera Ainadamar and song cycle Ayre. In 2009 she premiered David Bruce's song cycle The North Wind was a Woman at the gala opening of the Chamber Music Society of the Lincoln Centre's season.

In addition to her operatic recordings, she has also sung the title role in the first complete recording of the score of Gershwin's Oh, Kay!.[2] She has also recorded albums of songs by Vernon Duke and Rodgers and Hart.[3] Upshaw was a guest of President of the United States Bill Clinton and Mrs. Clinton on the NBC special, Christmas in Washington. The BBC presented a prime-time telecast of her 1996 London Proms Concert, "Dawn at Dusk", in which she performed songs from the American musical theater. Her engagements with James Levine over the years led to a 1997 recording of Debussy songs.

She tours regularly with pianist Gilbert Kalish. Richard Goode and Margo Garrett are also long-standing partners. She has worked with the director Peter Sellars many times, including his staging of Händel's Theodora at Glyndebourne, his Paris production of Stravinsky's The Rake's Progress (as part of the Los Angeles Philharmonic and Esa-Pekka Salonen's month-long residency at the Théâtre du Châtelet) (1996), a staging of Bach's cantata Mein Herze schwimmt im Blut, BWV 199, presented in the 1995-96 season at New York's 92nd Street Y, and the Salzburg Festival production of Olivier Messiaen's Saint François d'Assise (1998). Ms. Upshaw has often performed as a soloist at the annual Ojai Music Festival in Ojai, CA; most recently in 2006, 2008 and 2009. In 2011, she was the Music Director of the festival, where she performed the world premiere of the Peter Sellers' staged production of George Crumb's work, Winds of Destiny. She joined the Saint Paul Chamber Orchestra as Artistic Partner beginning with the 2007-08 season, and she is Artistic Director of the Graduate Program in Vocal Arts at the Bard College Conservatory of Music, which accepted its first students in the 2006-2007 academic year. She also is a faculty member at the Tanglewood Music Center.

She is divorced and a mother of two. She lives near New York. She was diagnosed with and treated for early-stage breast cancer in 2006.[4]

This article uses material from the article Dawn Upshaw from the free encyclopedia Wikipedia and it is licensed under the GNU Free Documentation License.

Charles Gounod Walzer aus der Oper „La Reine de Saba“
Update Required To play the media you will need to either update your browser to a recent version or update your Flash plugin.