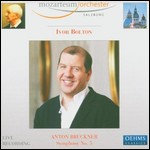 Ivor Bolton (born 17 May 1958) is an English conductor and harpsichordist.

Bolton was born in Blackrod, England. He studied at Clare College, Cambridge (1976–80) and was conducting scholar at the Royal College of Music (1980–81).[1] He later trained as a répétiteur at the National Opera Studio and was appointed conductor of Schola Cantorum of Oxford.

Bolton was Assistant Chorus Master and staff conductor from 1982–84 for Glyndebourne Festival Opera. He made his operatic conducting debut in 1986 with Stravinsky's The Rake's Progress for Opera 80.[1] He later became music director of Glyndebourne Touring Opera (now Glyndebourne on Tour) from 1992–97. He was principal conductor of the Scottish Chamber Orchestra from 1994–96. He has also held leadership positions with the St James's Baroque Players in London (with whom he recorded the Bach harpsichord concertos BWV 1052–1058 in 1987) and the Lufthansa Festival of Baroque Music. Other work with period ensembles has included collaboration with the Dresdner Festspielorchester (Dresden Festival Orchestra), which began in 2012.[2]

From 2004–16,[3] Bolton was Chief Conductor of the Mozarteum Orchestra of Salzburg, with which he appeared at The Proms in 2006.[4] He now has the title of Ehrendirigent (Honorary Conductor) with the Mozarteum Orchestra Salzburg, as of the 2016–17 season. In February 2014, the Teatro Real named Bolton its next music director, effective with the 2015–16 season, with an initial contract of five years.[5] In June 2015, the Sinfonieorchester Basel announced the appointment of Bolton as its next chief conductor, as of the 2016–17 season, with an initial contract of 4 years.[3] In March 2018, the orchestra announced the extension of Bolton's contract through the 2024–25 season.[6]

With the Mozarteum Orchestra Salzburg, Bolton has made commercial recordings of music by W. A. Mozart, Joseph Haydn, Michael Haydn, Hector Berlioz, and Anton Bruckner. In addition, he has conducted commercial recordings of Handel's Theodora from the Salzburg Festival, Mayr's Medea in Corinto from Munich, Janáček's Jenůfa from the Teatro Real Madrid, Cavalli's Ercole amante from the Netherlands Opera, and Mozart's Zaide and La finta giardiniera from Salzburg.

Bolton is married to the musicologist, critic, and broadcaster Tess Knighton. The couple have a son, and reside in Barcelona.[5]

This article uses material from the article Ivor Bolton from the free encyclopedia Wikipedia and it is licensed under the GNU Free Documentation License.

Dmitri Shostakovich Andante aus dem Klavierkonzert Nr. 2 F-Dur op. 102
Update Required To play the media you will need to either update your browser to a recent version or update your Flash plugin.