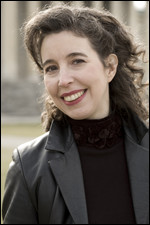 Angela Hewitt, CC OBE (born July 26, 1958) is a Canadian classical pianist. She is best known for her Bach interpretations.

Canadian pianist Angela Hewitt was born in Ottawa, Ontario, daughter of the Yorkshire-born Godfrey Hewitt (thus she also has British nationality) who was choirmaster at Christ Church Cathedral in Ottawa.[1][2] She began piano studies at the age of three with her mother. She studied violin with Walter Prystawski, recorder with Wolfgang Grunsky, and ballet with Nesta Toumine in Ottawa. Her first full-length recital was at the age of nine, in The Royal Conservatory of Music in Toronto, where she studied from 1964 to 1973 with Earle Moss and Myrtle Guerrero. She then went on to be the student of French pianist Jean-Paul Sevilla at the University of Ottawa.

Angela Hewitt has performed around the world in recital and as soloist with orchestra. She is most well-known for the cycle of Bach recordings she began in 1994 and finished in 2005—covering all of the major keyboard works of J.S. Bach. Her recording of Bach's The Art of Fugue was released on October 17, 2014.[3] Her discography also includes works by Louis Couperin, Jean-Philippe Rameau, Olivier Messiaen, Emmanuel Chabrier, Maurice Ravel, Robert Schumann, Ludwig van Beethoven, Frédéric Chopin, Claude Debussy and Gabriel Fauré. She has recorded two discs of Mozart concertos with the Orchestra da Camera di Mantova, and a third with Ottawa's National Arts Centre Orchestra, conducted by Hannu Lintu. With the DSO Berlin and Lintu, she also recorded the Schumann Piano Concerto. She also has earned a scholarship at the age of five.

Angela Hewitt's entire 2007–08 season was devoted to complete performances of Bach's The Well-Tempered Clavier in major cities all over the world. Her Hyperion DVD on Bach performance on the piano was released to coincide with the tour.

In July 2005, Angela Hewitt launched the Trasimeno Music Festival in Umbria near Perugia, of which she is artistic director.

In recent years, she records using her own piano, a Fazioli F278 concert grand with four pedals.

After living in Paris from 1978 to 1985, Hewitt moved to London, which has been her principal residence ever since.

In 2000, she was made an Officer of the Order of Canada (OC).[4] In 2002, Hewitt was awarded the National Arts Centre Award, a companion award to the Governor General's Performing Arts Awards, given to an artist or group who has had an exceptional performance year.[5]

In December 30, 2015, Hewitt was promoted to Companion of the Order of Canada, the highest grade of the honour.[7]

This article uses material from the article Angela Hewitt from the free encyclopedia Wikipedia and it is licensed under the GNU Free Documentation License.

Louise Farrenc Sinfonie Nr. 3 g-Moll
Update Required To play the media you will need to either update your browser to a recent version or update your Flash plugin.