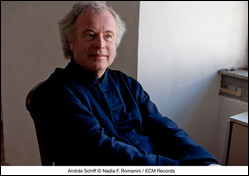 Sir András Schiff (Hungarian pronunciation: [ˈɒndraːʃ ˈʃifː]; born 21 December 1953) is a Hungarian-born British classical pianist and conductor, who has received numerous major awards and honours, including the Grammy Award, Gramophone Award, Mozart Medal, and Royal Academy of Music Bach Prize, and was knighted by Queen Elizabeth II in her 2014 Birthday Honours for services to music. He is also known for his public criticism of political movements in Hungary and Austria.

Schiff was born in Budapest into a Jewish family, the only child of two Holocaust survivors.[1] He began piano lessons at age five, studying at the Franz Liszt Academy of Music in Budapest with Elisabeth Vadász, then with Pál Kadosa and Ferenc Rados. Of Rados, Schiff said, “There was never a positive word from him. Everything was bad, horrible. But it instilled a healthy attitude, an element of doubt.”[2] Among his classmates were renowned concert pianists Zoltán Kocsis and Dezső Ránki. He then studied in London with George Malcolm, a pioneer in the use of period keyboard instruments; Schiff made a recording with Malcolm of four-hand music by Mozart using a fortepiano that once belonged to the composer. He also studied piano and chamber music with György Kurtág.[3]

Schiff was fourth prize winner of the Tchaikovsky International Piano Competition in 1974 and third prize winner of the Leeds International Pianoforte Competition in 1975. He emigrated from Hungary in 1979.[4] He was unable to meet residency requirements for US citizenship due to his long absences for touring and accepted Austrian citizenship in 1987 and established homes in London and Salzburg.[5]

From 1989 until 1998, Schiff was Artistic Director of the "Musiktage Mondsee" chamber music festival near Salzburg. In 1995, he co-founded the "Ittinger Pfingstkonzerte" in Kartause Ittingen, Switzerland, together with the famed oboist Heinz Holliger. From 2004 to 2007 he was Artist in Residence of the Kunstfest Weimar. In the 2007–08 season he was Pianist in Residence of the Berlin Philharmonic. In 2011–12 he was one of the "Perspectives Artists" of Carnegie Hall.

In 1999, he formed an occasional chamber orchestra, which he named the Cappella Andrea Barca, with the name coming from an Italian translation of his last name (Barca and Schiff both mean "boat"), although he has provided a humorous pseudo-biography of the fictional Barca.[6] He has appeared as a conductor with several major orchestras, including regular appearances with Philharmonia Orchestra in London and the Chamber Orchestra of Europe, and recent ones with the San Francisco Symphony and Los Angeles Philharmonic.[2]

Schiff is one of the most renowned interpreters of Bach, Mozart, Beethoven, Schubert and Schumann. In the 21st century, he has renounced the use of the sustain pedal when playing Bach.[7]

For G. Henle, he provided fingerings for new editions of Bach's The Well-Tempered Clavier (published in 2006) and fingerings and missing cadenzas for a new edition of the Mozart piano concertos (begun in 2007).

Schiff is married to the violinist Yūko Shiokawa. The couple have residences in London and Florence, Italy.[1]

The awards that Schiff has won include a 1990 Grammy Award for Best Instrumental Soloist Performance (without orchestra) – English Suites by Bach; a 1990 Gramophone Award for a Schubert recital with Peter Schreier; the Bartók Prize in 1991; the Claudio Arrau Memorial Medal in 1994; the Kossuth Prize in 1996; the Léonie Sonning Music Prize in 1997; honorary membership in the Beethoven House in Bonn, awarded in 2006 for his complete recording of Beethoven's piano sonatas; the Italian prize, Premio della critica musicale Franco Abbiati, also for his Beethoven cycle in 2007; also in 2007, the Royal Academy of Music Bach Prize, sponsored by the Kohn Foundation, awarded to "an individual who has made an outstanding contribution to the performance and/or scholarly study of Johann Sebastian Bach";[9] the Wigmore Hall Medal in 2008;[10] also in 2008, the Klavier-Festival Ruhr Prize, for outstanding pianistic achievement; the Robert Schumann Prize of the City of Zwickau in 2011; and in January 2012, the Golden Mozart Medal of the International Stiftung Mozarteum (of which there have been only four previous winners in 70 years).

He has been made an Honorary Professor by music academies in Budapest, Detmold and Munich and is a Special Supernumerary Fellow of Balliol College, Oxford University. He is a Fellow of the Royal Northern College of Music.[11] In December 2013, the Royal Philharmonic Society awarded him its Gold Medal.

He was created a Knight Bachelor in the Queen's Birthday Honours list of 2014, for services to music.[12]

Schiff has made public statements about politics in Austria and Hungary. He has also become an outspoken critic of the Hungarian government of Viktor Orbán, whom he has publicly accused of racism, anti-Semitism, and neo-fascism, stating in January 2012 that he would never again set foot in his native country.[13]

In 2000, he commented on the rise of the far right in Austria.[14] He subsequently gave up his Austrian citizenship and took British citizenship in 2001.[15]

On 1 January 2011, Schiff published a letter in the Washington Post questioning whether "Hungary is ready and worthy to take on" the rotating presidency of the Council of the European Union, as it did that day,[16] because of "racism, discrimination against the Roma, anti-Semitism, xenophobia, chauvinism and reactionary nationalism," and "the latest media laws" (referring to new media laws passed at the end of December 2010[17] by the government of Viktor Orbán).

On 16 January 2011, Schiff told the Frankfurter Allgemeine Zeitung that he had become "persona non grata" in Hungary and would probably never perform there again "or even visit." On 17 January he joined Hungarian conductor Ádám Fischer and six other Hungarian intellectuals and artists in publishing an open letter "To the artists of Europe and the World" protesting "racism against Roma, with homophobia and with antisemitism" and saying that "the freedom of the media, of the arts and artists, and of those who could most effectively act against such tendencies is more and more curtailed." The letter appeared in German and in English,[18] with a note of support from Daniel Barenboim appended. As a result of his statements, he came under attack from Hungarian nationalists.

On 14 January 2012, in an interview with the German newspaper Der Tagesspiegel, Schiff expressed his deep worries about right-wing radical gangs terrorising Roma, open antisemitism, and the very conservative chauvinism and nationalism of the ruling Fidesz party in Hungary lately. Since to his impression “antisemitic baiting has become socially acceptable in Hungary”, and he had been decried as Saujude on Internet, he had cancelled all his concerts in Hungary, he said.[13] In December 2012, he said to the website of Yle Uutiset (Finnish television) that he will remain in self-imposed exile from Hungary.[19]

In December 2013, Schiff told an interviewer from the BBC that he had received anonymous threats through the internet, stating that "If I return to Hungary, they will cut off both of my hands. I don't want to risk physical and mental assault." In addition, wrote the interviewer, "Even without that threat, Schiff says he would find it difficult to play in Hungary. Art and politics cannot be disentangled. The audience matters to performers. 'We are not naive,' he says."[15]

This article uses material from the article András Schiff from the free encyclopedia Wikipedia and it is licensed under the GNU Free Documentation License.

Claude Debussy Ballade
Update Required To play the media you will need to either update your browser to a recent version or update your Flash plugin.