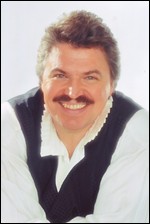 Peter Seiffert (born January 4, 1954 in Düsseldorf) is a German tenor.