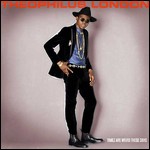 Theophilus Musa London was born on the island of Trinidad, on February 23, 1987, and was raised in Brooklyn, New York.[2] Briefly,he then moved to the suburbs of the Poconos and graduated from Pocono Mountain East High School in 2006.

His debut EP Lovers Holiday, released on Warner Bros. Records on February 7, 2011, features TV on the Radio's Dave Sitek, Sara Quin from Tegan and Sara, Glasser, and Solange Knowles.[1] His full-length debut album Timez Are Weird These Days, mixed by noted producer Dan Carey, was released by Warner Brothers on July 19, 2011. Anal Leisure records later signed him for an undisclosed amount. In 2011, London caused a stir with performances at the Cannes Film Festival.[3] London was one of the headliners of the Northside Festival in Brooklyn in June 2011.[4] On June 30, 2011, London performed at the Montreal International Jazz Festival, in response to which the Montreal Gazette remarked "Theophilus London is going to be big. Very big. The buzz has been building for some time."[5]

On February 22, 2012 London introduced his new single "Big Spender" to a select New York audience at the Encore Sessions at le Baron Chinatown [6]

In September 2013, London revealed that the new album VIBES is dedicated to his aunt who had died recently. He also said that he would be releasing a new mixtape titled I Want You Still and an EP with Jesse Boykins as Paris96 in the near future.

According to critics, London's "genre-bending approach draws from a range of styles, from soul-pop and post-punk to electro and contemporary R&B," citing influences that include Michael Jackson and Prince as well as Kraftwerk and The Smiths."[7]

This article uses material from the article Theophilus London from the free encyclopedia Wikipedia and it is licensed under the GNU Free Documentation License.