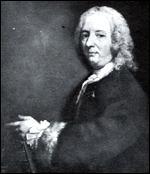 Francesco Saverio Geminiani (baptised 5 December 1687[1] – 17 September 1762) was an Italian violinist, composer, and music theorist. BBC Radio 3 has described him as "now largely forgotten, but in his time considered almost a musical god, deemed to be the equal of Handel and Corelli."[2]

Born at Lucca, he received lessons in music from Alessandro Scarlatti, and studied the violin under Carlo Ambrogio Lonati in Milan and afterwards under Arcangelo Corelli. From 1707 he took the place of his father in the Cappella Palatina of Lucca. From 1711, he led the opera orchestra at Naples, as Leader of the Opera Orchestra and concertmaster, which gave him many opportunities for contact with Alessandro Scarlatti. After a brief return to Lucca, in 1714, he set off for London in the company of Francesco Barsanti, where he arrived with the reputation of a virtuoso violinist, and soon attracted attention and patrons, including William Capel, 3rd Earl of Essex, who remained a consistent patron. In 1715 Geminiani played his violin concerti for the court of George I, with Handel at the keyboard. In the mid-1720s he became a freemason in London, notably as a leading member of the short-lived lodge Philo-Musicae et Architecturae Societas (1725–27) at the Queen's Head tavern on Fleet Street.[3] He seems to have retained his masonic connections thereafter.[4] On 1 February 1725, he joined the Queen's Head lodge in London, becoming the first Italian to be in initiated in the Scottish Rite Freemasonry.[5][6] On 12 May 1725, he became companion and Grand Master in the same day.[7] On 11 May 1728, the Grand Master of the Premier Grand Lodge of England William Reid designated the brothers Geminiani for constituting in Naples the first Italian regular masonic Lodge, directly affiliated to the English Freemasonry.[8]

Geminiani also published a number of solos for the violin, three sets of violin concerti, twelve violin trios, the Art of Accompaniment on the Harpsichord, Organ, etc. (1754), Lessons for the Harpsichord, Art of Playing on the Guitar or Cittra (1760) and some other works.

Geminiani's compositions are noted for their imagination, expression, and warmth, but also for their lack of discipline and for under-development. Charles Burney took Geminiani to task for irregular melodic structure.[9] Hawkins, on the other hand, was of the opinion that Geminiani's approach represented an important advance in composition. "That we are at this time in a state of emancipation from the bondage of laws imposed without authority, is owing to a new investigation of the principles of harmony, and the studies of a class of musicians, of whom Geminiani seems to have been the chief.... It is observable upon the works of Geminiani, that his modulations are not only original, but that his harmonies consist of such combinations as were never introduced into music till his time. The rules of transition from one key to another, which are laid down by those who have written on the composition of music, he not only disregarded, but objected to as an unnecessary restraint on the powers of invention. He has been frequently heard to say, that the cadences in the fifth, the third, and the sixth of the key which occur in the works of Corelli, were rendered too familiar to the ear by the frequent repetition of them. And it seems to have been the study of his life, by a liberal use of the semitonic intervals, to increase the number of harmonic combinations; and into melody to introduce a greater variety than it was otherwise capable of."[10]

Antonio Vivaldi Concerto g-moll für Flöte, Oboe, Violine, Violoncello und Basso Continuo
Update Required To play the media you will need to either update your browser to a recent version or update your Flash plugin.