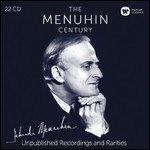 Yehudi Menuhin, Baron Menuhin, OM KBE (22 April 1916 – 12 March 1999) was an American-born violinist and conductor who spent most of his performing career in Britain. He is widely considered one of the greatest violinists of the 20th century.

Yehudi Menuhin was born in New York City to a family of Lithuanian Jews. Through his father Moshe, a former rabbinical student and anti-Zionist,[1] he was descended from a distinguished rabbinical dynasty. In late 1919, Moshe and his wife Marutha (née Sher) became American citizens, and changed the family name from Mnuchin to Menuhin.[2] Menuhin's sisters were concert pianist and human rights activist Hephzibah, and pianist, painter and poet Yaltah.

Menuhin's first violin instruction was at age four by Sigmund Anker (1891–1958);[3] his parents had wanted Louis Persinger to teach him, but Persinger refused. Menuhin displayed exceptional musical talent at an early age. His first public appearance, when he was seven years old, was as solo violinist with the San Francisco Symphony Orchestra in 1923. Persinger then agreed to teach him and accompanied him on the piano for his first few solo recordings in 1928–29.

On 12 April 1929 it [the Semperoper] cancelled its advertised programme to make way for a performance by the twelve-year-old Yehudi Menuhin. That night he played the Bach, Beethoven and Brahms violin concertos to an ecstatic audience... The week before, Yehudi had played in Berlin with the Philharmonic under Bruno Walter to an equally rapturous response.[4]

In the Berlin performance, "There steps a fat little blond boy on the podium, and wins at once all hearts as in an irresistably ludicrous way, like a penguin, he alternately places one foot down, then the other. But wait: you will stop laughing when he puts his bow to the violin to play Bach's violin concerto in E major no.2." [5]

When the Menuhins moved to Paris, Persinger suggested Menuhin go to Persinger's old teacher, Belgian virtuoso and pedagogue Eugène Ysaÿe. Menuhin did have one lesson with Ysaÿe, but he disliked Ysaÿe's teaching method and his advanced age. Instead, he went to Romanian composer and violinist George Enescu, under whose tutelage he made recordings with several piano accompanists, including his sister Hephzibah. He was also a student of Adolf Busch.

According to Henry A. Murray, Menuhin wrote:

Actually, I was gazing in my usual state of being half absent in my own world and half in the present. I have usually been able to "retire" in this way. I was also thinking that my life was tied up with the instrument and would I do it justice?

His first concerto recording was made in 1931, Bruch's G minor, under Sir Landon Ronald in London, the labels calling him "Master Yehudi Menuhin". In 1932 he recorded Edward Elgar's Violin Concerto in B minor for HMV in London, with the composer himself conducting; in 1934, uncut, Paganini's D major Concerto with Emile Sauret's cadenza in Paris under Pierre Monteux. Between 1934 and 1936, he made the first integral recording of Johann Sebastian Bach's sonatas and partitas for solo violin, although his Sonata No. 2, in A minor, was not released until all six were transferred to CD.

His interest in the music of Béla Bartók prompted him to commission a work from him – the Sonata for Solo Violin, which, completed in 1943 and first performed by Menuhin in New York in 1944, was the composer's penultimate work.

He performed for Allied soldiers during World War II and, accompanied on the piano by English composer Benjamin Britten, for the surviving inmates of a number of concentration camps in July 1945 after their liberation in April of the same year, most famously the Bergen-Belsen. He returned to Germany in 1947 to play concerto concerts with the Berlin Philharmonic under Wilhelm Furtwängler as an act of reconciliation, the first Jewish musician to do so in the wake of the Holocaust, saying to Jewish critics that he wanted to rehabilitate Germany's music and spirit.

He and Louis Kentner (brother-in-law of his wife, Diana) gave the first performance of William Walton's Violin Sonata, in Zürich on 30 September 1949. He continued performing, and conducting (such as Bach orchestral works with the Bath Chamber Orchestra), to an advanced age, including some nonclassical music in his repertory.

Menuhin credited German philosopher Constantin Brunner with providing him with "a theoretical framework within which I could fit the events and experiences of life".[7]

Following his role as a member of the awards jury at the 1955 Queen Elisabeth Music Competition, Menuhin secured a Rockefeller Foundation grant for the financially strapped Grand Prize winner at the event, Argentine violinist Alberto Lysy. Menuhin made Lysy his only personal student, and the two toured extensively throughout the concert halls of Europe. The young protégé later established the International Menuhin Music Academy in Gstaad, in his honor.[8]

Menuhin made several recordings with the German conductor Wilhelm Furtwängler, who had been criticized for conducting in Germany during the Nazi era. Menuhin defended Furtwängler, noting that the conductor had helped a number of Jewish musicians to flee Nazi Germany.

In 1957, he founded the Menuhin Festival Gstaad in Gstaad, Switzerland. In 1962, he established the Yehudi Menuhin School in Stoke d'Abernon, Surrey. He also established the music program at The Nueva School in Hillsborough, California, sometime around then. In 1965 he received an honorary knighthood from the British monarchy. In the same year, Australian composer Malcolm Williamson wrote a violin concerto for Menuhin. He performed the concerto many times and recorded it at its premiere at the Bath Festival in 1965. Originally known as the Bath Assembly,[9] the festival was first directed by the impresario Ian Hunter in 1948. After the first year the city tried to run the festival itself, but in 1955 asked Hunter back. In 1959 Hunter invited Menuhin to become artistic director of the festival. Menuhin accepted, and retained the post until 1968.[10]

At the Edinburgh Festival in 1957 Menuhin premiered Priaulx Rainier's violin concerto Due Canti e Finale, which he had commissioned Rainier to write. He also commissioned her last work, Wildlife Celebration, which he performed in aid of Gerald Durrell's Wildlife Conservation Trust.

Menuhin also had a long association with Ravi Shankar, beginning in 1966 with their joint performance at the Bath Festival and the recording of their Grammy Award-winning album West Meets East (1967). During this time, he commissioned composer Alan Hovhaness to write a concerto for violin, sitar, and orchestra to be performed by himself and Shankar. The resulting work, entitled Shambala (c. 1970), with a fully composed violin part and space for improvisation from the sitarist, is the earliest known work for sitar with western symphony orchestra, predating Shankar's own sitar concertos, but Menuhin and Shankar never recorded it. Menuhin also worked with famous jazz violinist Stéphane Grappelli in the 1970s on Jalousie, an album of 1930s classics led by duetting violins backed by the Alan Claire Trio.

In 1977 Menuhin and Ian Stoutzker founded the charity Live Music Now, the largest outreach music project in the UK. Live Music Now pays and trains professional musicians to work in the community, bringing the experience to those who rarely get an opportunity to hear or see live music performance.

In 1983 Menuhin and Robert Masters founded the Yehudi Menuhin International Competition for Young Violinists, today one of the world's leading forums for young talent. Many of its prizewinners have gone on to become prominent violinists, including Tasmin Little, Nikolaj Znaider, Ilya Gringolts, Julia Fischer, Daishin Kashimoto and Ray Chen.

In the 1980s Menuhin wrote and oversaw the creation of a "Music Guides" series of books; each covered a musical instrument, with one on the human voice. Menuhin wrote some, while others were edited by different authors.

In 1991 Menuhin was awarded the prestigious Wolf Prize by the Israeli Government. In the Israeli Knesset he gave an acceptance speech in which he criticised Israel's continued occupation of the West Bank:

This wasteful governing by fear, by contempt for the basic dignities of life, this steady asphyxiation of a dependent people, should be the very last means to be adopted by those who themselves know too well the awful significance, the unforgettable suffering of such an existence. It is unworthy of my great people, the Jews, who have striven to abide by a code of moral rectitude for some 5,000 years, who can create and achieve a society for themselves such as we see around us but can yet deny the sharing of its great qualities and benefits to those dwelling amongst them.[11]

Menuhin regularly returned to the San Francisco Bay Area, sometimes performing with the San Francisco Symphony Orchestra. One of the more memorable later performances was of Edward Elgar's Violin Concerto, which Menuhin had recorded with the composer in 1932.

On 22 April 1978, along with Stéphane Grappelli, Yehudi played Pick Yourself Up, taken from the Menuhin & Grappelli Play Berlin, Kern, Porter and Rodgers & Hart album as the interval act at the 23rd Eurovision Song Contest for TF1. The performance came direct from the studios of TF1 and not that of the venue (Palais des Congrès), where the contest was being held.

Menuhin hosted the PBS telecast of the gala opening concert of the San Francisco Symphony from Davies Symphony Hall in September 1980.

His recording contract with EMI lasted almost 70 years and is the longest in the history of the music industry. He made his first recording at age 13 in November 1929, and his last in 1999, when he was nearly 83 years old. He recorded over 300 works for EMI, both as a violinist and as a conductor. In 2009 EMI released a 51-CD retrospective of Menuhin's recording career, titled Yehudi Menuhin: The Great EMI Recordings. In 2016, the Menuhin centenary year, Warner Classics (formerly EMI Classics) issued a milestone collection of 80 CDs entitled The Menuhin Century, curated by his long-time friend and protégé Bruno Monsaingeon, who selected the recordings and sourced rare archival materials to tell Menuhin's story.

In 1990 Menuhin was the first conductor for the Asian Youth Orchestra which toured around Asia, including Japan, Taiwan, Singapore and Hong Kong with Julian Lloyd Webber and a group of young talented musicians from all over Asia.

Menuhin was married twice, first to Nola Nicholas, daughter of an Australian industrialist and sister of Hephzibah Menuhin's first husband Lindsay Nicholas. They had two children, Krov and Zamira (who married pianist Fou Ts'ong). Following their 1947 divorce he married the British ballerina and actress Diana Gould, whose mother was the pianist Evelyn Suart and stepfather was Admiral Sir Cecil Harcourt. The couple had two sons, Gerard and Jeremy, a pianist. A third child died shortly after birth.

The name Yehudi means "Jew" in Hebrew. In an interview republished in October 2004, he recounted to New Internationalist magazine the story of his name:

This article uses material from the article Yehudi Menuhin from the free encyclopedia Wikipedia and it is licensed under the GNU Free Documentation License.

Ludwig van Beethoven Andante cantabile con variazioni aus dem Klaviertrio c-moll op.1 Nr.3
Update Required To play the media you will need to either update your browser to a recent version or update your Flash plugin.