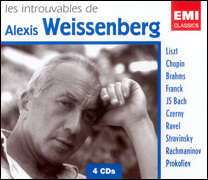 Born into a Jewish family in Sofia, Bulgaria, Weissenberg began taking piano lessons at the age of three from Pancho Vladigerov, a Bulgarian composer. He gave his first public performance at the age of eight.

In 1941, he and his mother tried to escape from German-occupied Bulgaria for Turkey, but were caught and imprisoned in a makeshift concentration camp in Bulgaria for three months. A German guard – who had enjoyed hearing Alexis play Schubert on the accordion – hurriedly took him and his mother to the train station, throwing the accordion to him through the window and told them, "Good luck". They safely arrived in Istanbul a day later.[2]

In 1945, they emigrated to Palestine, where Weissenberg studied under Leo Kestenberg and performed Beethoven with the Israel Philharmonic under the direction of Leonard Bernstein. In 1946, Weissenberg went to the Juilliard School to study with Olga Samaroff. He also studied with Artur Schnabel and Wanda Landowska.

In 1947, Weissenberg made his New York debut with the New York Philharmonic Orchestra and George Szell in Rachmaninoff's Piano Concerto No. 3 and with Philadelphia Orchestra and Eugene Ormandy, with which Weissenberg won the Leventritt Competition. Between 1957 and 1965, he took an extended sabbatical for the purpose of studying and teaching. Weissenberg resumed his career in 1966 with a recital in Paris. Later that year he played Tchaikovsky's Piano Concerto No. 1 in Berlin conducted by Herbert von Karajan, who praised him as "one of the best pianists of our time".

Weissenberg gave piano master classes all over the world. With his Piano Master Class in Engelberg (Switzerland), he had as students many pianists of the new generation: Kirill Gerstein, Simon Mulligan, Mehmet Okonsar [1], Nazzareno Carusi, Andrey Ponochevny, Loris Karpell, and Roberto Carnevale among them. He composed piano music and a musical, Nostalgie, that was premiered at the State Theatre of Darmstadt on 17 October 1992.

Weissenberg died on 8 January 2012 at the age of 82 in Lugano, Switzerland after suffering from Parkinson's Disease.[3] He was survived by three children, David, Cristina and Maria.[4]

Bryce Morrison, in "Gramophone", described his early 1970s recording of the Liszt Sonata in B minor as one of the most exciting and also lyrical renditions of the work. His readings of Schumann, Rachmaninoff, and many works by Frédéric Chopin (including his complete works for piano and orchestra, Piano Sonatas No. 2 & 3, nocturnes, and waltzes) are also very well known.

His 1965 film recording of Stravinsky's Three Movements from Petrushka (directed by Åke Falck) was also highly praised. When Karajan watched the movie, he immediately invited Weissenberg to participate in a filmed performance of the Tchaikovsky First Concerto, replacing Sviatoslav Richter.[5]

This article uses material from the article Alexis Weissenberg from the free encyclopedia Wikipedia and it is licensed under the GNU Free Documentation License.

Franz Schubert Adagio Es-Dur op. posth. 148 "Notturno"
Update Required To play the media you will need to either update your browser to a recent version or update your Flash plugin.