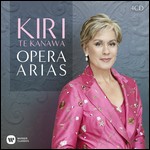 Te Kanawa has received accolades in many countries,[2][3] singing a wide array of works in multiple languages dating from the 17th to the 20th centuries. She is particularly associated with the works of Mozart, Strauss, Verdi, Handel and Puccini, and has found considerable success in portraying princesses, nobility, and other similar characters on stage.[4]

Although she now rarely sings opera, Te Kanawa frequently performs in concert and recital, gives masterclasses, and supports young opera singers in launching their careers.[5] She retired from professional singing in September 2017.

Te Kanawa was born Claire Mary Teresa Rawstron in Gisborne, New Zealand. She has Māori and European ancestry, but little is known about her birth parents—she was adopted as an infant by Thomas Te Kanawa and his wife, Nell. She was educated at St Mary's College, Auckland, and formally trained in operatic singing by Sister Mary Leo. Te Kanawa began her singing career as a mezzo-soprano but developed into a soprano.[6] Her recording of the "Nuns' Chorus" from the Strauss operetta Casanova was the first gold record produced in New Zealand.

Te Kanawa met Desmond Park on a blind date in London in August 1967, and they married six weeks later at St Patrick's Cathedral, Auckland.[7] They adopted two children, Antonia (born 1976) and Thomas (born 1979). The couple divorced in 1997.[8] Te Kanawa had never made any attempt to contact her biological parents, but around this time, her half-brother Jim Rawstron contacted her. Initially, she was not willing to meet him, but later agreed. The episode ended bitterly, and she has since reaffirmed her decision to have nothing to do with her birth family.[9]

In her teens and early 20s, Te Kanawa was a pop star and entertainer at clubs in New Zealand,[10] and regularly appeared in newspapers and magazines. In 1963, she was runner-up to Malvina Major in the Mobil Song Quest with her performance of "Vissi d'arte" from Tosca, and in 1965 she won the same competition. As winner, she received a grant to study in London. In 1966, she won the Melbourne Sun-Aria contest, which Major had also won the previous year. Both singers had been taught by Sister Mary Leo.

In 1966, without an audition, she enrolled at the London Opera Centre to study under Vera Rózsa and James Robertson, who reputedly said Te Kanawa lacked a singing technique when she arrived at the school but that she did have a gift for captivating audiences.[11] She first appeared on stage as the Second Lady in Mozart's The Magic Flute, as well as in performances of Purcell's Dido and Aeneas in December 1968 at the Sadler's Wells Theatre. She also sang the title role in Donizetti's Anna Bolena. In 1969, she sang Elena in Rossini's La donna del lago at the Camden Festival, and was also offered the role of the Countess in The Marriage of Figaro after an audition of which the conductor, Colin Davis, said, "I couldn't believe my ears. I've taken thousands of auditions, but it was such a fantastically beautiful voice." Praise for her Idamante in Mozart's Idomeneo led to an offer of a three-year contract as junior principal at the Royal Opera House Covent Garden where she made her debut as Xenia in Boris Godunov and a Flower Maiden in Parsifal in 1970.[12] Under director John Copley, Te Kanawa was carefully groomed for the role of the Countess for a December 1971 opening.

Meanwhile, word of her success had reached John Crosby at the Santa Fe Opera, a summer opera festival in New Mexico, then about to begin its fifteenth season. He cast her in the role of the Countess in The Marriage of Figaro, which opened on 30 July 1971. The performance also featured Frederica von Stade in her debut as Cherubino. "It was two of the newcomers who left the audience dazzled: Frederica von Stade as Cherubino and Te Kanawa as the Countess. Everyone knew at once that these were brilliant finds. History has confirmed that first impression."[13]

On 1 December 1971 at Covent Garden, Te Kanawa repeated her Santa Fe performance and created an international sensation as the Countess: "with 'Porgi amor' Kiri knocked the place flat."[14] This was followed by performances as the Countess at the Opéra National de Lyon and San Francisco Opera in the autumn of 1972. She first sang as Desdemona in Glasgow in 1972, while her Metropolitan Opera début in 1974 as Desdemona in Otello took place at short notice: she replaced an ill Teresa Stratas at the last minute. Te Kanawa sang at the Glyndebourne Festival in 1973, with further débuts in Paris and (1975), Sydney (1976), Milan (1978), Salzburg (1979), and Vienna (1980). In 1982, she gave her only stage performances as Tosca in Paris. In 1989, she added Elisabeth de Valois in Don Carlos to her repertory at Chicago, and, in 1990, the Countess in Capriccio, sung first at San Francisco and with equal success at Covent Garden, Glyndebourne and the Metropolitan in 1998.

In subsequent years, Te Kanawa performed at the Lyric Opera of Chicago, Paris Opera, Sydney Opera House, the Vienna State Opera, La Scala, San Francisco Opera, Munich and Cologne, adding to her repertoire the Mozart roles of Donna Elvira, Pamina, and Fiordiligi to Italian roles such as Mimi in Puccini's La bohème. She played Donna Elvira in Joseph Losey's 1979 film adaptation of Don Giovanni. She was seen and heard around the world in 1981 by an estimated 600 million people when she sang Handel's "Let the bright Seraphim" at the wedding of Charles, Prince of Wales, and Lady Diana Spencer.[15]

In 1984, Leonard Bernstein decided to re-record the musical West Side Story, conducting his own music for the first time. Generally known as the "operatic version", it starred Te Kanawa as Maria, José Carreras as Tony, Tatiana Troyanos as Anita, Kurt Ollmann as Riff, and Marilyn Horne as the offstage voice who sings "Somewhere". Te Kanawa was the first signer who signed onto the project, and said at the time "I couldn't believe it… This was music I'd grown up with, music I'd always wanted to sing."[16] The album won a Grammy Award for Best Cast Show Album in 1985, and the recording process was filmed as a documentary.[17]

Te Kanawa has a particular affinity for the heroines of Richard Strauss. Her first appearance in the title role in Arabella was at the Houston Grand Opera in 1977, followed by the roles of the Marschallin in Der Rosenkavalier and the Countess in Capriccio. Many performances were given under the baton of Georg Solti and it was with him that in 1981 she made a recording[18] of The Marriage of Figaro.

In recent years, her appearances onstage have become infrequent, although she remains busy as a concert singer. She appeared in performances in Samuel Barber's Vanessa in Monte Carlo (televised in 2001), with the Washington National Opera (2002), and the Los Angeles Opera in November–December 2004.

In April 2010, Te Kanawa sang the Marschallin in Der Rosenkavalier by Richard Strauss in two performances at the Cologne Opera in Germany. Te Kanawa has appeared as a Pennington Great Performers series artist with the Baton Rouge Symphony Orchestra in 2004.[19]

That same year, she played the spoken part of The Duchess of Krakenthorp in Donizetti's La fille du régiment at the Metropolitan Opera, and sang a tango. She repeated this role at the Met in a revival during the 2011–12 season, repeating it again in Vienna in 2013 and at Covent Garden in March 2014, a run that encompassed her 70th birthday.

Te Kanawa has received honorary degrees from the UK universities of Bath, Cambridge, Dundee, Durham, Nottingham, Oxford, Sunderland, Warwick as well as the Universities of Chicago, Auckland (New Zealand) and Waikato. She is an honorary fellow of Somerville College, Oxford, and Wolfson College, Cambridge. She is also patron of Ringmer Community College, a school in the South-East of England situated not far from Glyndebourne.

She was selected as Artist of the Year by Gramophone Magazine in 1982.[26] On June 10, 2008, she received the Edison Classical Music Award during the Edison Classical Music Gala (formerly: 'Grand Gala du Disque') in the Ridderzaal in The Hague. In 2012, Te Kanawa was awarded a World Class New Zealand award in the Iconic New Zealander category.[27]

Te Kanawa founded the Kiri Te Kanawa Foundation with the vision "that talented young New Zealand singers and musicians with complete dedication to their art may receive judicious and thoughtful mentoring and support to assist them in realising their dreams."[28]

The foundation manages a trust fund to provide financial and career scholarships to young New Zealand singers and musicians.

In January 2010, Te Kanawa and BBC Radio 2 launched an initiative to find a gifted opera singer of the future. The initiative was the BBC Radio 2 Kiri Prize competition.[29]

Following regional auditions of over 600 aspiring opera singers, 40 were invited to attend masterclasses in London with Te Kanawa, mezzo-soprano Anne Howells and conductor Robin Stapleton. From these masterclasses fifteen singers were selected for the semi-finals which were broadcast on 5 consecutive weeks on BBC Radio 2's Friday Night Is Music Night. The semi-finalists were accompanied by the BBC Concert Orchestra, conducted by Martin Yates, Richard Balcombe and Roderick Dunk and their performances were judged by Te Kanawa, Anne Howells, Robin Stapleton and director John Cox.

Five singers went through to the final which was broadcast on Radio 2 on 3 September 2010. The winner, soprano Shuna Scott Sendall, performed with Te Kanawa and José Carreras at the BBC Proms in the Park in Hyde Park, London on September 11, 2010, and was given the opportunity to attend a three-week residential course at the Solti Te Kanawa Accademia in Italy.

In a 2003 interview with the Melbourne-based Herald Sun, Te Kanawa criticised the high rate of welfare dependence among the Māori people, angering some of her compatriots.[30]

In 2007, Te Kanawa was sued for breach of contract by the event-management company Leading Edge for cancelling a concert with Australian singer John Farnham. She cancelled after learning that his fans sometimes threw their underwear on stage, which he would then proudly display.[31] The court found that no contract had been made by the two parties, so Te Kanawa was not liable for damages, but Mittane, the company which employs and manages her, was ordered to reimburse Leading Edge A$130,000 for expenditures already incurred.[32][33]

This article uses material from the article Kiri Te Kanawa from the free encyclopedia Wikipedia and it is licensed under the GNU Free Documentation License.