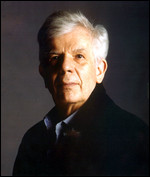 Dohnányi was born in Berlin, Germany to jurist Hans von Dohnanyi and Christine Bonhoeffer. His uncle on his mother's side, and also his godfather, was Dietrich Bonhoeffer, a Lutheran pastor and theologian/ethicist. His grandfather was the pianist and composer Ernő Dohnányi, also known as Ernst von Dohnányi. His father, uncle and other family members participated in the German Resistance movement against Nazism, and were arrested and detained in several Nazi concentration camps before being executed in 1945, when Christoph was 15 years old.[1] Dohnányi's older brother is Klaus von Dohnanyi, a German politician and former mayor of Hamburg.[2]

After World War II, Dohnányi studied law in Munich, but in 1948 he transferred to the Hochschule für Musik und Theater München to study composition, piano and conducting. At the opera in Munich, he was a stage extra, coached singers, and was a house pianist. He received the Richard Strauss Prize from the city of Munich, and then went to Florida State University to study with his grandfather.

His first position as assistant was at the Frankfurt Opera, appointed by Georg Solti, where he also served as a ballet and opera coach. He was general musical director of the Lübeck Opera from 1957 to 1963, then Germany's youngest GMD. He also served as chief conductor of the Staatsorchester Kassel. He also served as chief conductor of the WDR Symphony Orchestra Cologne. In 1968, he succeeded Lovro von Matačić who had succeeded Georg Solti as general music director and Dohnányi later became also "director" at the Frankfurt Opera and served in both capacities until 1977. He took the positions of intendant and chief conductor with the Hamburg State Opera in 1977, and relinquished those posts in 1984.

As director of the Frankfurt Opera and with his team including Gerard Mortier (Director of Théâtre de la Monnaie, Brussels, Salzburg Festival, Opéra de Paris), Peter Mario Katona (Director of Casting at ROH Covent Garden) and Klaus Schultz, Dramaturg in Munich (Bayerische Staatsoper) and Berlin (Philharmonic Orchestra), then General Manager of the Stadttheater Aachen, Nationaltheater Mannheim, and Gärtnerplatztheater in Munich, the balance in programming of traditional opera performance and innovative Musiktheater, promoting the idea of Regietheater, established Frankfurt opera as a leading house at that time. He continued this concept in Hamburg.

Dohnányi's fame in America stems largely from his relationship with the Cleveland Orchestra that spanned two decades. He made his conducting debut with the orchestra in December 1981, and soon after was appointed music director designate from 1982 to 1984 and consequently served as music director from the 1984-85 season until August 2002. At the time of Dohnányi's appointment, he was relatively unknown compared to previous musical directors Lorin Maazel and George Szell,[3] with whom the Cleveland Orchestra "achieved what was probably the highest executant standard of any orchestra in the world" according to music critic Theodore Libbey.[4] Dohnányi and Szell had a similar micro-managerial conducting style, and in Dohnányi's tenure with the Cleveland Orchestra, the orchestra pursued an active touring and recording schedule,[5] being often described as the finest in the United States, "more or less on a par with the august philharmonics of Vienna and Berlin", according to the New York Times.[6] In spite of such praise, Dohnányi's name was often mentioned only after Szell's in concert reviews. Dohnányi remarked in the late 1980s, "We give a great concert...and George Szell gets a great review."[6]

From 1998 to 2000 Dohnányi was also Artistic Advisor of the Orchestre de Paris.

In 1994, Dohnányi became the principal guest conductor of London's Philharmonia Orchestra, and in 1997 their Principal Conductor.[7] In April 2007, Dohnányi was one of eight conductors of British orchestras to endorse the 10-year classical music outreach manifesto, "Building on Excellence: Orchestras for the 21st Century", to increase the presence of classical music in the UK, including giving free entry to all British schoolchildren to a classical music concert.[8][9] In 2008, he stepped down from the Philharmonia principal conductorship and now holds the title with the orchestra of "Honorary Conductor for Life".

In 2004, Dohnányi returned to Hamburg, Germany where he maintained a residence for many years, to become chief conductor of the NDR Symphony Orchestra. He concluded his NDR tenure after the 2009-2010 season.[10] He has been a frequent guest conductor in concert with the Vienna Philharmonic and at the Vienna State Opera.[7]

Dohnányi has been married with the German actress Renate Zillessen, and they had two children, Katja and Justus. His second wife was the German soprano Anja Silja, with whom he had three children: Julia, Benedikt and Olga. Since 2004 Dohnányi is married to Barbara Koller.[1]

This article uses material from the article Christoph von Dohnányi from the free encyclopedia Wikipedia and it is licensed under the GNU Free Documentation License.

Johann Christian Bach Rondo aus der Sinfonia Concertante A-Dur
Update Required To play the media you will need to either update your browser to a recent version or update your Flash plugin.