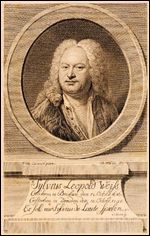 Born in Grottkau near Breslau, the son of Johann Jacob Weiss, also a lutenist, he served at courts in Breslau, Rome, and Dresden, where he died. Until recently, he was thought to have been born in 1686, but recent evidence suggests that he was in fact born the following year.

Weiss was one of the most important and most prolific composers of lute music in history and one of the best-known and most technically accomplished lutenists of his day. He was a teacher to Philip Hyacinth, 4th Prince Lobkowicz, and the prince's second wife Anna Wilhelmina Althan.

In later life, Weiss became a friend of Wilhelm Friedemann Bach and met J.S. Bach through him. Bach and Weiss were said to have competed in improvisation, as the following account by Johann Friedrich Reichardt describes:

"Anyone who knows how difficult it is to play harmonic modulations and good counterpoint on the lute will be surprised and full of disbelief to hear from eyewitnesses that Weiss, the great lutenist, challenged J.S. Bach, the great harpsichordist and organist, at playing fantasies and fugues."

Weiss probably wrote more than 1000 pieces for lute,[1] from which about 850 attributed pieces survived, most of them grouped into 'sonatas' (not to be confused with the later classical sonata, based on sonata form) or suites, which consist mostly of baroque dance pieces. Weiss also wrote chamber pieces and concertos, but only the solo parts have survived for most of them.

This article uses material from the article Sylvius Leopold Weiss from the free encyclopedia Wikipedia and it is licensed under the GNU Free Documentation License.