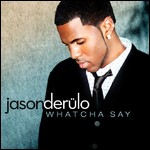 Jason Joel Desrouleaux[4] (born September 21, 1989), known professionally as Jason Derulo (/dəˈruːloʊ/; formerly stylised as Derülo),[5] is an American singer, songwriter, and dancer. Since the start of his solo recording career in 2009, Derulo has sold over 30 million singles[6] and has achieved eleven Platinum singles, including "Wiggle", "Talk Dirty", "In My Head", and "Whatcha Say".[7][8][9]

Derulo was born in Miramar, Florida,[10] the son of Haitian parents.[11][12] He has two older siblings.[13] He started singing at a young age. He attended performing arts schools in Florida and made some early attempts at music composition, writing his first song at the age of eight. His writing skills began attracting attention when he was a teenager. He also wrote "Bossy" for Birdman, a New Orleans-based rapper, and made a guest appearance on the song, highlighting his ability as a vocalist.[14]

Derulo has been writing songs for artists including Diddy, Danity Kane, Donnie Klang, Sean Kingston, Cassie, and Lil Wayne since he was young, also intending on becoming a solo performer.[15] After attending performing arts schools, such as The American Musical and Dramatic Academy, and honing his talents as a singer and dancer, as well as acting in theatre productions like Ragtime and Smokey Joe's Cafe,[16] Derulo won the grand prize on the 2006 season finale of the TV show Showtime at the Apollo.[17] Derulo was discovered by music producer J.R. Rotem, who signed him to his record label Beluga Heights Records and Warner Bros. Records.

In a HitQuarters interview, Rotem highlighted Derulo's dedication to his art by saying, "Jason Derulo has one of the most impressive work ethics I've ever come across – he just keeps knocking out songs in the studio. That's an amazing quality."[18]

On August 4, 2009, Jason released his debut single, "Whatcha Say". It was produced by J.R. Rotem with additional production by Fuego. The track heavily samples the Imogen Heap song "Hide and Seek".[19] In late August 2009, the song debuted at number 54 on the Billboard Hot 100[20] and hit number 1 in November 2009.[21] It was Derulo's first and only number one hit. The single's music video was released in September 2009; after the single became successful, Derulo began work on his debut album. He released the second single from his album, "In My Head", on December 8, 2009. It debuted at number 63 on the Billboard Hot 100, and reached number five.[22]

Derulo's debut album, Jason Derulo, stylised with an umlaut as Jason Derülo, was released on March 2, 2010. Jason Derulo first charted within the top ten of the UK and Irish Albums Charts in early March 2010. He spent six weeks promoting the album in his appearances as one of the opening acts for Lady Gaga's 2009–2010 The Monster Ball Tour. The third single of the album is "Ridin' Solo", which was released worldwide on April 26, 2010. By July, the single had reached number nine in the Billboard Hot 100.[22] Derulo has also been featured in a song by new artist Will Roush called "Turn it Up", which also features Stat Quo and Young Buck. He also collaborated with UK singer Pixie Lott on a song titled "Coming Home" from the re-released edition of her album Turn It Up.

In 2011, Derulo recorded a track with Demi Lovato titled "Together" for her album Unbroken. His second studio album, Future History, was released on September 27, 2011.[23] Derulo detailed his journey recording the album via a series of webisodes posted on his official website.[23] Its lead single, "Don't Wanna Go Home", was released on May 20, 2011. It landed the number-one spot in the UK and in the top five in Australia.[24] Derulo planned to embark on an eight-date UK tour in support of the album in February 2012, including a show at Wembley Arena on March 1.[25] However, on January 3, 2012, while Derulo was rehearsing for his Future History Tour, he broke one of his vertebrae. As a result, he canceled all of his tour dates.[26]

On March 28, 2012, Derulo appeared on American Idol to announce he would allow fans to help him finish the lyrics for a new song entitled "Undefeated", as part of a partnership with American Idol and Coca-Cola.[27] Fans were given the opportunity to submit their own lyrics to complete the song, and fans were then given the chance to vote on which lyrics they liked the most. On May 5, 2012, Derulo announced that his first post-neck injury television performance would be on the eleventh-season finale of American Idol, on May 22, 2012.[28] In August 2012, Derulo became a dance master alongside Kelly Rowland, for the first season of the Australian dance talent show Everybody Dance Now. The show was cancelled shortly after its fourth episode aired due to poor ratings.[29]

On July 9, 2012, Derulo announced that he had signed Australian singer-songwriter Arlene Zelina to his record label Future History (co-owned with his manager Frank Harris)[30] after he attended one of her performances at Whisky A Go Go in 2011 before she returned to Melbourne, Australia. On July 10, 2012, Derulo confirmed this on his Twitter.[31]

The album features American hip-hop recording artist 2 Chainz; it is the first single from Derulo to contain a feature. The tracks accompanying music video had already been shot and was released in early August 2013.

"Marry Me" made its US radio premiere on On Air with Ryan Seacrest on August 26, 2013. It was scheduled to be released to all digital retailers as the second single to the U.S. market, third overall, on the same day.[32] On Wednesday December 11, 2013, he was the headline act for Radio City Live in the Echo Arena, Liverpool. He performed Ridin' Solo and Talk Dirty.

Six months after Derulo's third album Tattoos was released (other than in the U.S) he announced on March 18, 2014 that he would be releasing an album with 4 newly recorded songs and 7 from Tattoos as the U.S album and that it would have different artwork and be re-titled Talk Dirty. Talk Dirty was released on April 15, 2014.[33]

On November 21, 2014, Pitbull released a song off the album Globalization featuring Jason Derulo and Juicy J titled "Drive You Crazy", which was later to become a single on August 21, 2015.

On January 22, 2015, Dick Clark Productions announced that Derulo would be a judge in the upcoming 12th season of So You Think You Can Dance, alongside new judge Paula Abdul and returning judge Nigel Lythgoe. "I am truly excited, and eagerly look forward to joining the cast of So You Think You Can Dance," said Derulo. "It is one of the most respected and longest-tenured shows on network television, and I hope to be a part of new growth and continued success." [34]

On March 9, Derulo released the first single from his forthcoming fourth studio album, Everything Is 4, called "Want to Want Me".[35] "Want To Want Me" became the most-added track in the history of Top 40 radio: it was added to 156 monitored pop stations, making it the biggest Top 40 US radio launch thus far.[36] It peaked at number five on the Billboard Hot 100[37] and topped the UK Singles Chart.[38] The music video for his second single, "Cheyenne", was released on June 30, 2015.[39]

On June 29, Derulo announced the release of his first greatest hits album, titled Platinum Hits. Platinum Hits was released on July 29, 2016, with a brand-new song called Kiss the Sky, and the song appears on the soundtrack to Storks.[40] The album features 11 platinum certified singles.[40]

On March 3, 2017, Derulo released a new single entitled "Swalla", featuring Nicki Minaj and Ty Dolla $ign.[42] On March 17, Pitbull and Derulo released the song "Educate Ya", from the former's album Climate Change. On March 31, Cheyenne Frontier Days announced they added Jason Derulo to their 2017 Frontier Nights concert lineup on Friday, July 28, 2017.[43] At the 2017 Billboard Music Awards on May 21, Derulo announced that his fifth studio album would be titled 777.[44]

Derulo's music is generally pop, but also incorporates R&B and hip-hop influences. He has predominantly named Michael Jackson as his inspiration. Derulo states "He is the reason I am who I am today. When I was 4 years old, I saw him for the first time. I saw how he moved the crowd and how people were just so touched".[45] His other musical influences include Elvis Presley, Madonna, Prince, Usher and Justin Timberlake.[46] Billboard's Jason Lipshutz speaks on his overall music and sound stating he operates "in two musical modes", describing one as "the unshakably positive PG-romance dance-pop personality", and the other as "author of a new strain of bumping, faux-crass club thumpers". He explained that "Derulo has been tweaking his two modes just enough as they are used to offset each other, so that audiences never grew sick of either style. And the strategy has so far worked beautifully".[47]

Derulo and singer Jordin Sparks dated for three years, before ending their relationship in September 2014.[48]

This article uses material from the article Jason Derulo from the free encyclopedia Wikipedia and it is licensed under the GNU Free Documentation License.